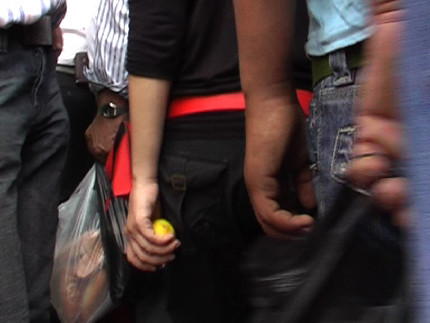 LIMINAL SPACES/grenzräume is a project by the Palestinian Association of Contemporary Arts (PACA), Ramallah, The Israeli Centre for Digital Art, Holon, and the University of the Arts, Berlin. The project was launched with a conference in March 2006, in the area of the Qalandiya checkpoint between Jerusalem and Ramallah and continued with individual residencies, which gave artists the opportunity to research tactics and artistic strategies for addressing the physiognomy of specific sites and their everyday operations while adhering to exposing Israeli spatial and contextual politics.

The project invited artists, architects, academics and art practitioners to examine the condition of everyday space, borders, physical segregation and cultural territories and challenge the possibilities of art as a catalyst for political and social change. The focus of the project is the radically divided and fragmented urban region of Jerusalem/Ramallah, which has become a laboratory for an urbanism of radical ethnic segregation. Artists investigated the perception of the frontiers and challenged their accessibility, permeability and potential as contact and communication zones. Artists employed new forms of creative practice adopting and subverting contemporary technology and systems of media communication, underlining the central role played by technology in the shaping of the physical and mental borders.

The exhibition LIMINAL SPACES/grenzräume presents the results of this artistic research process to the public for the very first time.
www.gfzk.de