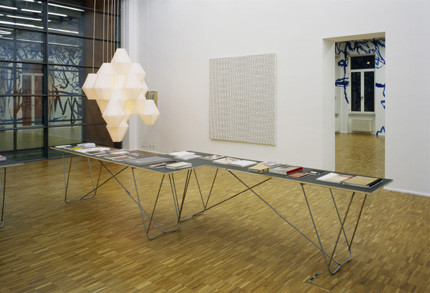 Markus Dreßen, exhibition view, GfZK Leipzig, 2008
Markus Dreßen is convinced that “graphic design itself must assume propositional functions in order to clarify certain aspects of a particular artistic stance.” Design, especially in the field of contemporary art, cannot remain neutral. In this of all fields, where the particular (visual) status quo is constantly questioned and expanded upon, design must take a stand in regard to the use of signs, their contextualisation, circulation or the meaning they transfer.

Dreßen works closely with artists, curators and authors in his projects. These partnerships of equals – Dreßen himself describes them as collaborations and himself as a collaborator – require a continual process of negotiating and disputing all kinds of perceptions. His own position should not wane into a mere provision of services, nor does he wish by his work to replace artistic or curatorial assignments. Design is understood as a ‘publishing process’, in which editorial and creative tasks intermesh.

In 2000, Dreßen founded the Spector working group with Anne König and Jan Wenzel. Spector, though, is also the name of a periodical which has appeared at irregular intervals since 2001 (spector cut+paste, with Tilo Schulz), and of a label under which many pieces of printed work by Markus Dreßen have since appeared. Spector’s working method sets the standard for his own projects. These too are essentially based on an exchange among the participants, and are the expression of a collective process, in which individual interests are not ridden roughshod over. The exhibition at the GfZK shows a cross-section of his graphic works, with the emphasis on book design.

Markus Dreßen, born in 1971 at Münster, studied graphic design at the Hochschule für Grafik und Buchkunst (Academy of Visual Arts) at Leipzig. Since 1998, Markus Dreßen has been working in various group constellations for the GfZK. He is responsible for the visual identity of the GfZK, but also for a series of publications, for Neo Rauch, Ilya Kabakov, Sarah Sze and Christine Hill among others. Markus Dreßen has been awarded several major prizes, such as the AIGA “Award 50 Books/ 50 Covers” in 2005 for “Inventory – The Work of Christine Hill and Volksboutique”. For <>forward by Olaf Nicolai, with Kristina Brusa, he received the 2004 Golden Letter in the “Schönste Bücher aus aller Welt” (Most Beautiful Books in the World) competition, and the 2nd prize of the Stiftung Buchkunst (Book Art Foundation).

Markus Dreßen has been a professor at the Academy of Visual Arts in Leipzig since 2006.
www.gfzk.de