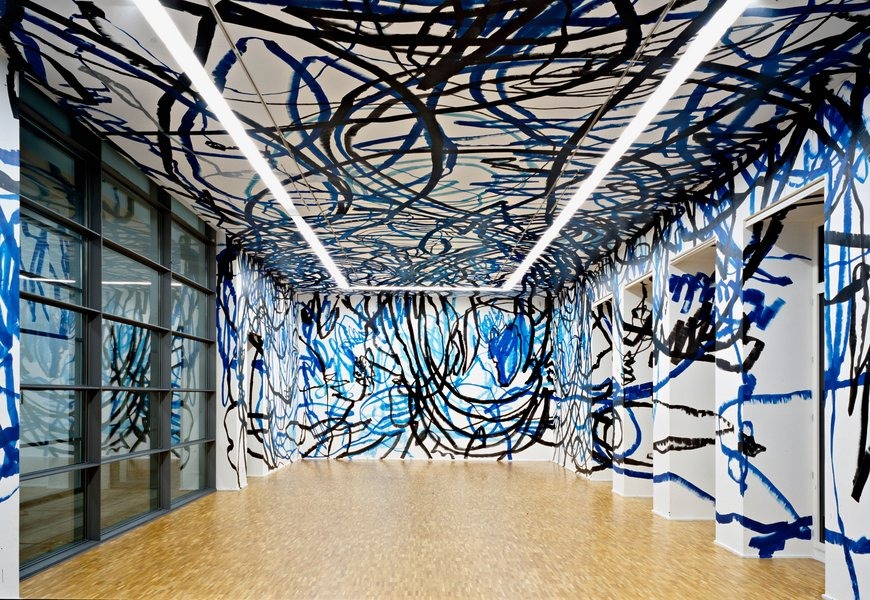 Expressive lines lead across walls and ceilings, enmeshing the viewer on all sides. The drawings and paintings of Otto Zitko disrupt all settings and break free of any conventional frame. The artist explores the relationship between drawing and space, between the drawn gesture and the solid architectural form in large-scale murals and wall paintings which seem to take hold of the entire room, overwriting and redefining the structure of the space.

At first sight, these drawings suggest an immediacy of artistic expression as if this was a manifestation of an excessive performance in space, but in fact this is a representation of immediacy. On closer inspection, the vigorously-drawn gradating lines which sweep over the room prove to have been composed piece by piece. They are in essence dependent on the spatial dimensions they wish to surmount. The resulting brittleness of the expressive gesture no longer permits the presentation of a direct self-expression. Authenticity and subjectivity prove to be constructed and staged.

The Museum of Contemporary Art already owns a 1986 drawing series by Otto Zitko, his “Analphabet”. This series, a gift from Arend Oetker to the Museum of Contemporary Art, provided us with the impetus to invite Zitko to implement his large-scale mural drawings in the spaces of the future library. Another decisive factor was a large collection of largely West German informal painting of the late 1940s and 1950s. Within years of the collapse of communism in former East Germany, these works, which had been collected by the Cultural Committee of German Business, were presented as long-term loans to the newly-founded Museum of Contemporary Art Leipzig, and in November 2006, they were donated without charge. The work of Otto Zitko presents a connection to these works of post-war art, but also to expressive works in the German Democratic Republic of the 1980s. Pieces from the collection are displayed concurrently on the first floor of GfZK-1.

Early next year, the Jovis publishing house of Berlin in collaboration with Studio Zitko and the Salzburg Kunstverein will publish a comprehensive book entitled Die Konstruktion der Geste (‘The Construction of Gesture’). This shows the genesis of the murals and wall paintings in projects for galleries and private clients.

The exhibition of Otto Zitko is the first in a series of events which take an artistic engagement with the theme of ‘the library’ in the form of presentations, projections and exhibitions (with Maria Eichhorn, Glegg & Guttmann, Tobias Rehberger et al.). Exact dates will be announced later.
www.gfzk.de