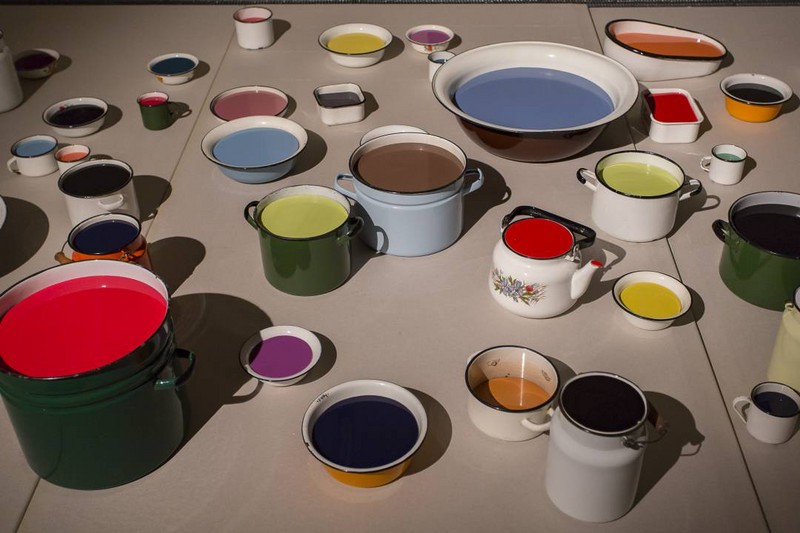 in cooperation with The School of Kyiv – Kyiv Biennial 2015, the Visual Culture Research Center in Kiev and the Badischer Kunstverein Karlsruhe

with the collaboration of Bükü – Büro für kulturelle Übersetzung Leipzig

In order to understand its own form, art is obliged to grant access to the real world. How can it do this without succumbing to the tyranny of the documentary, the activist pathos of the day or simply to a formalistic refinement of reality?
In a parcour, the exhibition traces the transitions between normality and states of exception, security and menace, sleep and restlessness, energy and exhaustion. Passing disputed territories and contaminated landscapes, it not only leads to psychological and real places of retreat. It also questions the subjectivity of artists, which is urgently required in a traumatic situation of conflict and political and social unrest.

Many of the recent exhibitions dedicated to the civil unrest and military conflict in Ukraine have fused this politically committed subjectivity with the directly enacted work of art, motivated by activism. This narrow view has not only resulted in a distorted image of contemporary art in Ukraine, but has also blocked out the difficult and complex question of a politics of form, of the artistic object itself. As a part of the School of Kyiv – Kyiv Biennale 2015, the “Leipzig class” sketches a double way out of this fatal logic of representation: the exhibition shows works of art that have arisen in association with social phenomena, questions and conflicts. Focussing on the forms of expression of a critical public, the accompanying programme invites its visitors to take part in a discussion on the interdependency of politics and aesthetics.

The exhibition Politics of Form is part of the School of Kyiv – Kyiv Biennale 2015. It arose in collaboration with the curators of the biennale, Hedwig Saxenhuber and Georg Schöllhammer, and in cooperation with the Badischer Kunstverein.
www.gfzk.de