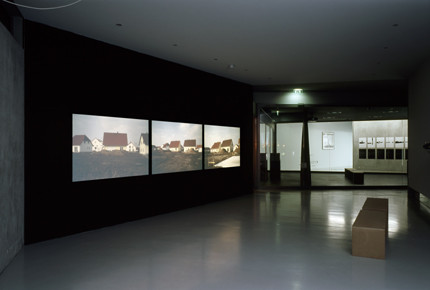 Sofie Thorsen, exhibition view, GfZK Leipzig, 2005
In drawings and slide series with explanatory audio texts, Sofie Thorsen has for several years been exploring the themes of dwelling, the influence of tourism on established village structures and the formal appearance of detached houses and housing estates in new or older villages.

The village is the subject of an entire series of the artist’s work, in which it figures as a metaphor for the living conditions and social structures within particular dimensions. As a result of increasing mobility, suburban structures are undergoing drastic changes. Either the old structures are dying or new ones are developing that are intended or attempting to look like the functioning villages of the past. This can be seen outside of urban centres in areas with shopping malls and squares built in an artificially homely manner – for example in holiday resorts that remind one of Disneyland. Here “the search for the cosy” (Setha Low, sociologist) is the primary concern of residents and planners alike. Local differences are the result of the inclusion of traditional construction styles and materials as signifiers for the buildings’ users.

Past and present, reality and fiction play and essential role in all Thorsen’s projects. What was, what is, what has changed and what might happen? In the course of her investigations fictional elements increasingly enter the works. In Village fig. 2/Counting the Parts, 2001 Thorsen inventories an entire village, and by doing so makes one aware of its characteristic uniformity. The list “transforms the village structure into a succession of monotonous buildings, and the classic contrasting of urban and rural as ‘anonymous’ v. ‘familiar’ also seems to lose force in the dreariness of country life.” (Non-Places, Frankfurter Kunstverein, 2002) While on a grant in Leipzig in 2002 Sofie Thorsen examined the city’s suburban areas in two ways. Her starting point was the question, “What is happening on Leipzig’s outskirts?” and the first stage was concentrated on the lives and living situation of people who in the past few years had moved into a home of their own – usually a detached prefab. This work, entitled Ein Haus, innerhalb der letzten zehn Jahre am Stadtrand gebaut, mit einer Gesamtwohnfläche zwischen 110 und 150 m2, bewohnt von einer zwei- bis sechsköpfigen Familie, 2003, has three parts: 1. a postcard of a prefabricated family home; 2. over 30 black-and-white drawings of the houses’ interiors; 3. an audiotape of a Leipzig radio station’s raffle of a detached house.

Following this work Sofie Thorsen created the three-track tape-slide work Village fig. 7/+ - Guided tours, 2004 (3x80 slides), consisting of photographs taken over a period of one year at various places away from Leipzig’s city centre. She was above all interested here in situations in which there was a meeting of old and new, and in this enumeration is concerned with what in recent years has been added to a village and what has disappeared.

She thus addresses a central problem of the region. The large investment since the collapse of communism has brought about much renewal, but has also led to the disappearance of long-established structures. Thorsen has a young girl speak the text, consciously giving her work – and the reality it deals with – a future-oriented component, but at the same time pointing out the loss of historical memory.

In earlier works she has also looked into the question of how architecture adapts itself to structural change and regional politics. How questions of economics affect the planning perspectives for the structure of residential and/or holiday estates is the subject, for example, of Village fig. 4/Einige öffentlich zugängliche Informationen, und 20 Ereignisse die sich um das Jahr 2002 in Plaiv zugetragen haben könnten, Schweiz, 2002 . Sitting on a wooden bench above the village of Madulain (Engadin), one could hear audio-information about the region – triggered by motion detector – which was otherwise inaccessible to tourists. The “information” mixed facts with fictions and related events which might have occurred there.

The work Village fig. 9, The Golden Castle That Hung In The Air, 2004/2005 came about during a stay in Warsaw. Central to this series of black-and-white, icon-like drawings of fences, barriers, crossings and hedges – i.e. places of boundary and transition – is an inquiry into the increasing incidence of so-called “gated communities”. Sofie Thorsen contrasts these images of a form of dwelling with fragments of interviews that illustrate her attempts to find out more about what is behind these structures, how people live there and how these areas are guarded. The title of the work refers to a Norwegian fairytale in which the protagonist describes in various different ways his attempts to get past dragons and monsters to enter castles.

The work Village fig. 10, Am Hauptplatz im Wald, 2004/2005 came about during the Festival of the Regions in Upper Austria and is concerned with the places where young people meet and spend their leisure time. Sofie Thorsen led workshops on these places, and asked the young people to relate what happened in them and what their function was. The results went into a making-of video about the project and a six-minute 35 mm film showing the places in black-and-white drawings; a girl tells a story about everyday life and what happens at the meeting places; a poster series announced the film in town and countryside. The exhibition conceived for the GfZK shows Thorsen’s view, since 2001, of the phenomenon of the village. It does so in several chapters and from different perspectives, and makes use of a variety of media. According to context it illuminates various aspects of Thorsen’s work on this theme, and yet all the individual projects relate to one another. This relationship will be underscored through visual axes and contrasting chapter-pairs.
www.gfzk.de