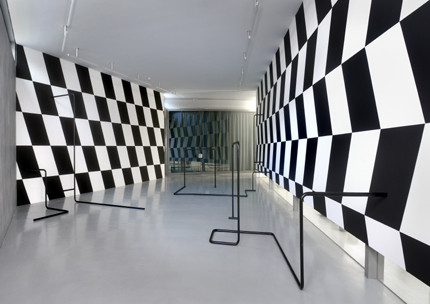 Demonized in the East as the “spawn of the bourgeoise” and “degenerate,” and celebrated in the West as the symbol of new freedom and the “pallbearer of ideology” in art, in the 1950s and 1960s Formalism represented a clear dividing line between the two political blocks. The political dualism of the post war years found its echo in the cultural policy of the time. The mutual anomosities between the GDR and the Federal Republic of Germany came to exemplorize the separation between the Ostblock and the western allies. In the GDR “the cult of the ugly and the immoral in the art of the West” was equated with the “general malaise of the capitalist system.” What was called for instead was a type of art, “infused with humanism,” and one which presented “the inner strengths, the nobleness and beauty of a newly arisen social order.” Set against this a different kind of art, one apparently free of ideology, was fostered in the West. In his exhibition FORMSCHÖN, Tilo Schulz devotes himself to this phenomenon from the perspective of the here and now, in the hope of triggering a long overdue new interpretation of formalism since the collapse of the Ostbloc and highlighting its ideological conforms and oppositional roles in the West and East. By way of formalism, the artist takes us along a visual course of new sculptures, wall paintings and installations, uniting his investigation with display, presentation, and the culture of memory of the last 15 years.