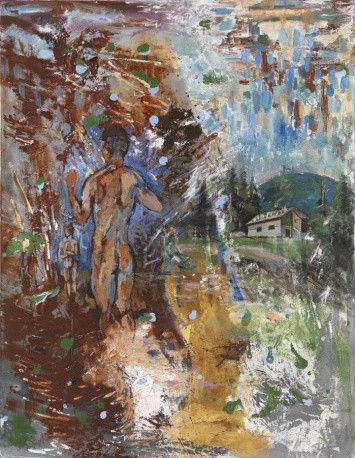 Giò Marconi is very pleased to announce Am kühlen Tisch an exhibition of new works by German artist Amelie von Wulffen. This is the artist’s first solo show with the gallery.

Amelie von Wulffen is best known for her collages, large-scale works on paper where she includes photography, painting and drawing and creates dreamlike scenarios in which fragments of the artist's life are mixed with strongly suggestive and evocative narrative elements. Interior and exterior spaces overlap and blend together, like in the works of Romanticism and Expressionism tradition.

The show at Giò Marconi features a new series of paintings, a slideshow of her latest comic and a group of hand-painted chairs.
The paintings on display are large canvases depicting still life, floating boats, indoor and outdoor scenes, where abstraction and figuration are mixed in an original manner, associating biomorphic shapes to fluid and organic areas of colour and more recognisable objects. Quite a few details of these works as flowers, lemons, landscapes are taken from ancient paintings and put into a new space, in particular the paintings of Gustave Caillebotte appear quite a lot.
Then there are two small canvases showing the self-portraits by Max Beckmann, Gustave Caillebotte and Francisco Goya. Von Wulffen studied extensively the artists and the works from Nineteenth and Twentieth century, but this is not just a reference to some moments in the history of art or a kind of parody of modern painting. As she re-proposes these artists' self-portraits and not just any portraits, von Wulffen refers to a deep admiration for their works and also to the way these artists saw themselves as painters and individuals.
This introspection is a characteristic that features throughout the artist's work and is evident in the comic on view as a slideshow in which Amelie von Wulffen presents with great irony the fears, the insecurities and the frustration of a mid-career artist working today.
Here von Wulffen is using herself as a character, this character has authentic aspects, but is also playing a role and thereby she is proposing a more fractured self-portrait than the ones of the male painters she is referring to.

In another recent series of works, von Wulffen got inspiration from comics as well as also from children’s illustrations and painted a bucolic world populated by anthropomorphic fruits and vegetables. A series of playful and irreverent watercolours where veggies of all kinds are caught in perverted and humiliating situations. The reference here is to Goya’s Capriccios. Her soft style reminds that of children's books; however, it hides more complex issues and human feelings such as loneliness, violence, failure and humiliation.

Von Wulffen’s works often go far beyond the boundaries of the canvas, extending into the exhibition space in the form of wall paintings and furniture. Here individual and collective space converge: von Wulffen’s identity dialogues with the audience’s history. Sitting on one of the chairs hand-painted by the artist viewers find themselves caught in her dilemmas and so they are forced to negotiate with their own fears.
All the work by von Wulffen starts from her autobiographical experience to explore the collective memory.