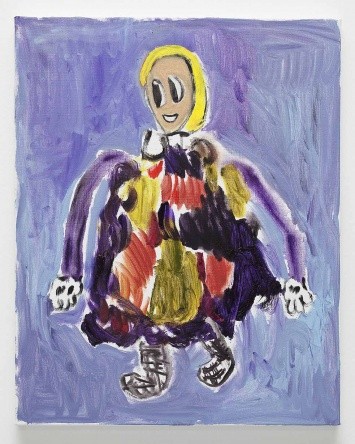 Giò Marconi is pleased to announce an exhibition of André Butzer featuring new paintings. This is the third solo show by the artist at the gallery since 2006.

André Butzer’s work addresses the medium of painting, exploring its history, its boundaries and possibilities.
The artist’s early paintings are overrun with an almost psychedelic use of colours and often filled with biomorphic shapes, disturbing sneering figures, and masks with empty eyes reminiscent of Walt Disney characters. There are clear references here to the history of art, and in particular to Expressionism, but also to politics, comics and science fiction. Against backgrounds of almost grotesque colour, the artist combines reality and Utopia, the past and the present, in fact, Butzer himself has described his work as “Science-Fiction Expressionism”.
Later, Butzer apparently abandoned figurative art, and indeed from the late 1990s onwards, he has always embarked on his course dominated by abstraction: the backgrounds of vivid colour have been now replaced by monochrome planes, greys, and thickly applied paint, areas inhabited only by curling lines, like electric cables, painted in bright, pastose layers of colours.

The exhibition at Giò Marconi, to be considered as a continuation of the artist’s first solo show with the gallery in 2006 entitled N-Leben (N-Life) features the so-called N-paintings as well as several new post N-paintings.
It was around 2010 that Butzer started to produce his new series of N-paintings, the outcome of a process which saw the abandonment of both figurations and use of gaudy colour. Grey planes are used as the background for certain rectangular forms which seem to have neither beginning nor end. Those lines which previously were created by squeezing paint straight from the tube onto the canvas have now become flat strips applied with a brush.
“N” stands for NASAHEIM (NASA Home), a neologism conceived by the artist and consisting of a combination of NASA (the acronym for the American space agency) and Anaheim, the original home of Disneyland. “N” is an imaginary, unreachable destination, invented by the artist, a non-place situated on the edge of abstraction where, according to Butzer, all the colours are conserved and where creation will find its true realisation.
Butzer regards his artistic production as the long unfolding of an unbroken sequence, so even his former works were depending from “N”.
The N-paintings constitute a sort of zero zone in painting, where relationships between colours, compositional structure and pictorial unity are taken to their extreme. Thus, the N-paintings obey their own particular rules and celebrate the autonomy of the pictorial medium, where even the artist occupies a position in the background.
Following works have further refined his research of pure colour and light: the silvery background has become white, with contrasting bands of black which fluctuate across the picture, filling the space and creating a strong chromatic contrast.
However, this is by no means a series which could be reproduced mechanically. Although the works might seem simply a chromatic horizontal and vertical variations of one another, there are in fact notable differences in the brushwork, in the way in which the surfaces are handled with the mercurial egg tempera pigment, that has been worked up into a highly refined emulsion, and in the use and gradations of colour. If you come up close to the canvases and examine them carefully, slight undertones of colour emerge from the background. Furthermore the various elements that make up the picture are always different like the relationship between the spaces. The vertical and horizontal contrast with each other, depicting the pictorial relationship between life and death.
“Butzer namely does not construct or paint rectangles, his pictures create conditions. In his art there is no constructivism. To understand or to experience that, the viewer needs to empathize intensively with the paintings. (...) Every picture can be understood as a proportion of light that in his uniqueness refers to the never ending beginning of life and death.” (Thomas Groetz)
Exhibited along with the achromatic series of N-paintings are some recent small coloured canvases, the so-called Post N-paintings.

André Butzer was born in Stuttgart in 1973, lives and works in Rangsdorf near Berlin.