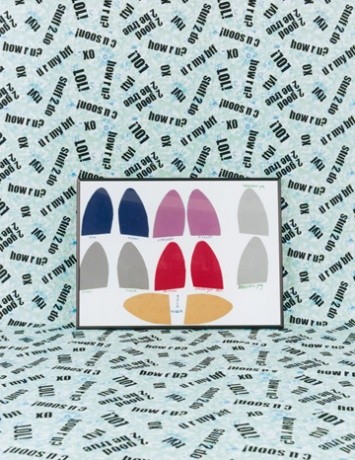 Giò Marconi is very pleased to announce In the Realm of, a new exhibition by Annette Kelm.

For her second solo show with the gallery the German artist will present some recent works along with others created specifically for the occasion.

Annette Kelm works exclusively within the medium of photography. At first sight she follows traditional genres such as portrait, still life, landscape and architectural photography, making reference sometimes to advertising, but the objects she chooses are always combined with various elements so as to be removed of its traditional functions and carried into another dimension, which, however, is not fantasy.
Many of Kelm’s pictures show every-day unspectacular objects, such as plants, fabrics, cars... but all of these images are dominated by something ambiguous that makes them quite distant. The artist is attracted by those situations where there is cultural confusion or a time shift; she adds ambivalent meanings and also uses tricks to achieve this confusing effect; playing with perspective, light and the relationship between the foreground and the background.

For example in one of the works exhibited, Stilleben mit Zierlauch, light is extremely flat and unvarying and the background is actually a photo background that looks like tiles and it’s so present that it becomes an essential part of the photographed object.
Kelm’s photos are immediate images but they evade unequivocal interpretation; at the end the disorienting effect prevails.

Her pictures go beyond various references to history of photography and show a strong interest of the artist towards cultural history. This stands out above all in the works made since 2013, which are based upon her studies of the archives of historical museums in Germany. For example, one series shown in the exhibition portrays various museum’s displays devoted to the history of the feminist movement in Germany.

Annette Kelm continues her research on feminism with Latzhose (Dungarees) a series of photographs taken in 2014. The object is a pair of purple dungarees of an artist’s friend’s mother displayed on the neutral, flat background of her study floor. Dungarees were perceived as typical men’s workwear, but during the Seventies in Germany the feminist-activist and their supporters used to dye dungarees lilac because red was for woman and blu for men, and lilac was the colour in between. So they become a symbol of women’s liberation.
Every image of the series is different from each other, in fact Annette Kelm makes various versions of the same image with tiny differences and there is never a dominating photo. The repetition of the objects complicate the idea of the image and any possibility of a unique representation.

These formal combinations by Kelm force the viewer to question the function and the socio-political dimension of daily objects which crowd our lives.

Annette KELM is born in Stuttgart, Germany in 1975. She has studied at the Hochschule für bildende Künste in Hamburg. She currently lives and works in Berlin.