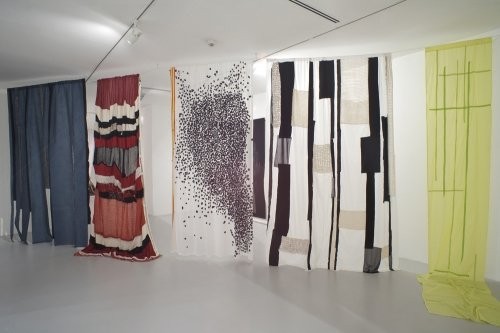 installationview: Gio' Marconi, 2010
BEHIND THE CURTAIN.

Gio Marconi Gallery is very pleased to announce the group show Behind the Curtain.
Curtains of various artists are on display:

Rosa Barba's work "The indifferent Back of a View rather than its Face" has been laser-cut to reveal a text that speaks of light, shadows, and reflections. Indeed, this text is literally produced when a beam of light is projected from the ceiling at the curtain, casting a shadow of the story onto the back wall.
John Bock’s curtain resembles an actual tablecloth onto which he positions various plates and cups and his traditional sausage shaped objects made of different fabrics and wool. In attaching all these colourful objects the per se two-dimensional curtain becomes a three-dimensional installation.
Kerstin Braetsch proposes PrinZIP, a three part multi coloured work made of spraypainted transparencies. Attached to the ceiling the seemingly fragile transparency is free floating and thereby almost functions as a transparent room divider.
Matthew Brannon’s “Messy Affair” shows a plain black cloth which is embellished with an elaborate abstract embroidery.
Tom Burr's very conceptual curtain emerges from an open wooden structure and looks like the light brown cloth has just been dropped to the floor and left behind.
Andrè Butzer shows with his 180 x 240 cm big red abstract painting “Wie die Welt leuchtet” (“How the World is Illuminated”), reminds that the boundaries within art are blurred
Nathalie Djurberg’s folkloristic thickly painted flower curtain actually acts as an entreé into her world and functions as a real curtain in that it “hides” a projection with one of the artist’s films.
Kitty Krauss' minimal works often play with the idea of a black square. In the piece for the show the black element came from a man’s business suit that the artist has cut into two rectangular shapes, leaving the seam in the middle, and then suspending the pieces from the wall, letting the material slide limply across the floor.
Tobias Rehberger dedicates his curtains to five personages of the Italian show business: Benedetta Barzini, Caterina Caselli, Massimo Ranieri, Rita Pavone and Sabina Ciuffini.
They are people who, in their particular time and moment, have left their traces on the collective consciousness.
Markus Schinwald’s “Untitled (Dolls)” is, with its rich dark red folds and heavy drapery, the most opulent of the curtains on display. In Schinwald’s works curtains are a reoccuring theme. The curtain is imprinted with various dolls in different kinds of shapes and sizes: they are sitting, lying, and are piled on top of eachother. The paintings hiding behind can only be seen by those who dare to take a glimpse behind the curtain.
Gedi Sibony puts up a badly cut out piece of carpet onto the wall. A patch made of light brown adhesive tape thereby becomes an ornamental decoration and bridges the gap between article of daily use and artwork.
www.giomarconi.com