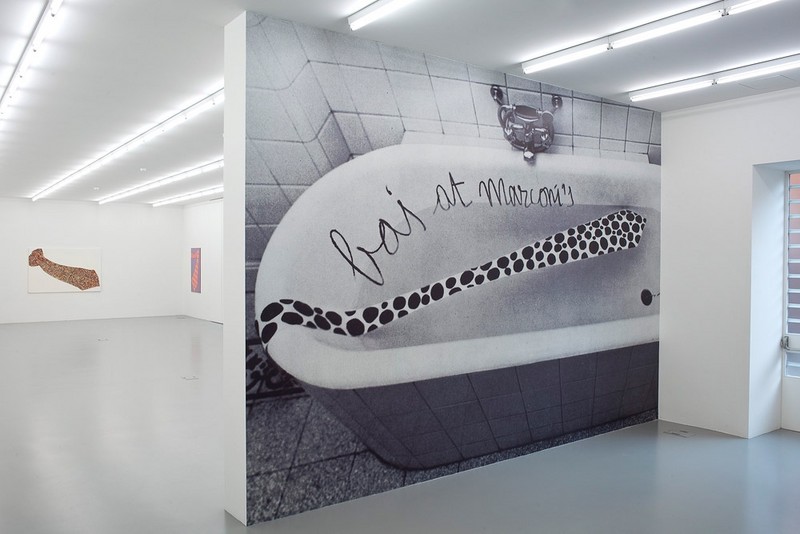 Giò Marconi is pleased to announce the exhibition Baj at Marconi’s. Plastics 1967 – 1969 which takes place in conjunction with the Enrico Baj exhibition currently on display at Luxembourg & Dayan in New York.
With a passion for the eccentric and a strong iconoclastic impulse, Enrico Baj was one of the central figures of the Italian neo-avant garde. His art and political writings have played an instrumental role in the chronologies of influential movements, from Dada and Surrealism to Art Informel and Cobra, as well as the Milanese movement of Nuclear Art, which he co-founded with Sergio Dangelo. Throughout it all, Baj formed an idiosyncratic iconography that was all his own. Departing from gestural abstraction in the mid-1950s, he honed a painterly practice that defiantly embraced figuration and kitsch symbols, subverting authoritative, bourgeois conventions of “good taste.”

In the late 1960s Enrico Baj’s main focus was on his Plastics.
During this period he began exploring the aesthetic possibilities of all different kinds of plastic materials. His first steps into the new medium were made with little multi-coloured Lego bricks that Baj included into his conventional tapestry canvases, thereby adding a very contemporary, colourful and pop art component to his otherwise plushy fabric backgrounds.
He cut, assembled and superimposed onto the entire spectrum that was offered by these new industrial materials: PVC, lego, polyethylene, polyester – all this gave birth to numberless colourful characters, landscapes and his ultimate series of loud and varicoloured neckties.

The centerpiece of Baj’s 1969 Studio Marconi exhibition, which this show is a reference to, was the “La cravatta di Jackson Pollock”, a monumental plastic work. But the show included also several other tie images, all made of plastic. To accompany that exhibition Baj had made the multiple Baj at Marconi’s – a plastic shopping bag crammed with souvenirs of his various activities. This jaunty multiple embodied the inventive approach to new mediums and man-made materials that brought him into the realm of Pop art.

At Gio’ Marconi, various works of his 1960s plastic series are on display:
A group of bright and cheerful portraits adorned with flowery details and colourful buttons is being shown. Each of these works is composed of differently coloured sheets of plexiglass overlapping each other and thereby creating different shades and nuances of coulours.
The portraits are presented together with more elaborate works like “Passeggiata al Central Park”. In there, a walker with an uplifted walking stick happily strolls within a gaudy landscape of trees and flowers. Also “Hay Tatta Eschige” (a title stemming from Dada) with its decorative green landscape and wooden street in the foreground adds a more narrative component to the show.

As an addition to the multi-coloured plexiglass portraits a diptych of two enigmatic abstract portraits made out of aluminium foil, another “new” material that Baj frequently used, is displayed.

The main focus of the exhibition is on Enrico Baj’s neckties.
This already becomes apparent in the show’s anteroom which welcomes the visitor with an over life-size photograph of the advertisement of the 1969 exhibition at the Studio Marconi that shows a bathtub with a long floating dotted black and white necktie.
From the medals, which Baj had used excessively for his series of generals, he developed the motif of the necktie. Inside the exhibiton one whole wall is dedicated to all the various tie works. On shiny varicoloured plastic backgrounds or glittery polyester fabrics with abstract patterns Baj playfully drapes the overdimensioned, striped, polka-dotted motley object of desire and creates a modern day icon out of it.
In a 1970 artist’s book titled “La Cravate ne vaut pas une Medaille“, he explained the necktie’s iconography as a common man’s medal – an everyday badge of honour: “The tie is the minimal structure upon which I have focused in my recent work. The tie is the decoration preferred by today’s men because it entirely substitutes medals, military and civil decorations. The tie is the best symbol of today’s western culture and thought.”

Born in Milan, Enrico Baj (1924-2003) began studying at the Brera Academy of Art in 1938, only to flee to Geneva six years later in order to avoid conscription to the Italian army under Mussolini. Returning to Italy after the war, Baj pursued law studies, which he duly abandoned, becoming instead a mainstay in the Milanese avant garde art scene by the mid-1950s. Baj had his debut in New York in 1960, as part of the exhibition Surrealist Intrusion in the Enchanters’ Domain, organized by Marcel Duchamp and André Breton at D’Arcy Galleries. The following year, his work was included in the influential exhibition Art of Assemblage (1961), organized by William Seitz at the Museum of Modern Art, New York. In 1964 a room devoted to Baj’s work was presented in the 22nd Venice Biennial, and three major retrospectives followed in 1971, held at Palazzo Grassi, Venice; Museum of Contemporary Art, Chicago; and Musée de l’Athénée, Geneva. Recent exhibitions were held in the following venues, among others: the 55th Venice Biennial (2013), Fondazione Arnaldo Pomodoro, Milan (2013), and Palazzo delle Esposizioni, Rome (2001-2002).
www.giomarconi.com