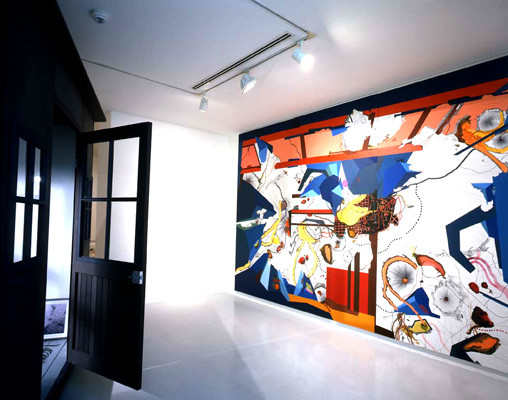 Gio’ Marconi gallery is pleased to announce a new exhibition of works by Franz Ackermann (Neumarkt-Sankt- Veit, 1963). The artist will display dynamic site specific installations comprising new works for each room from wall paintings to oil on canvas, from oils to wall papers, from wall papers to wall drawings, from wall drawings to sculptures.
At his third solo exhibition at Giò Marconi, Ackermann uses the gallery space as an extension of his studio, the site where the installation is finally constructed and finished. The Mental Maps installation, displayed on the ground floor, was born after his recent travels that brought him from Salamanca, via Lisbon, to Rio de Janeiro, and from there deeper into the continent, to Paraguay and Bolivia into the Andes Mountains, to Machu Picchu in Peru, and finally back to the Atlantic coast, to Buenos Aires in Argentina. The large-scale mural paintings represent a metaphorical link between his ongoing mental map series - watercolours made while on the move in hotels around the world that first emerged in the early 1990s during extensive travels to Asia - and his paintings and sculptures constructed from memory in the studio.
Ackermann’s work is based on journey or on ‘mental maps’ he creates during his frequent travels. The artist readily digests the subtle nuances of popular destinations and regurgitates them as international signifiers: brightly coloured shapes, high-impact graphics and pop iconography. In this meaning Ackermann's work frequently deals with the double side of tourism - the glamour, speed and consumption of international travel but also the detritus, architectural scarring and garbage that it leaves behind. Colourful and architectural his abstract works function as elements within a greater system - an imaginary mental topography that explores notions of travel, urbanism and globalization, connecting the specifics of disparate locales. His installations map are real and imaginary places, buildings and urban layouts, but are as much about the fantasy of escape as they are political gestures in an ever-shifting world.
Always site-specific his work comments on the architecture of the space it inhabits, whilst inviting the viewer to enter its proposed geographical space. Ackermann's paintings fuse various perspectives in one image, from distant to close up or simultaneously from above and below creating an ungrounded, all-over terrain that recalls the visual delirium and alienation that one experiences in new cities.
Between the last exhibions we can highlight: “Home, home again”, DA2 Domus Artium 2002, Salamanca (2007); “Home, home again”, White Cube, London (2006); “Home, home again”, Kestnergesellschaft, Hannover (2006); Kunstparterre, Munich (2006); “Árvores Douradas”, Centro Cultural Banco do Brasil, Rio de Janeiro (2006); FRAC, Champagne-Ardenne, Reims (2005); IMMA Irish Museum of Modern Art, Dublin (2005); “Naherholungsgebiet”, Kunstmuseum, Wolfsburg (2003); “Eine Nacht in den Tropen”, Kunsthalle, Basel (2002); “The Waterfall”, Museum of Contemporary Art, Chicago (2002); “Seasons in the Sun”, Stedelijk Museum, Amsterdam (2002); “B.I.T. (Back in town)”, Castello di Rivoli, Turin (2000).