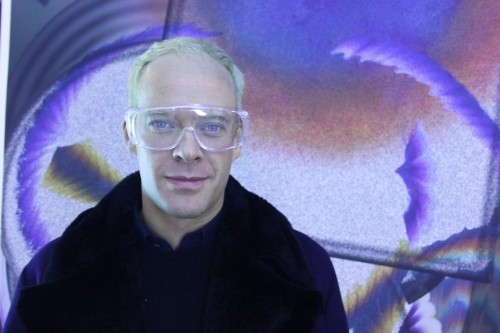 The project: A massive multiplication (and therefore creation, obfuscation and perpetual annihilation) of the self.

The basis (or rather the necessary fiction—or rather the door to the maze) being Kerstin Brätsch and Adele Röder. Begin, then, here, now, with them. “Begin, ephebe, by perceiving the idea of this invention...”4

Kerstin Brätsch. Glow Rod Tanning with.... The subject: the suffering of painting. The aim: to cast a damning light on painting.5 A painting always asks, craves, to "be in the right light” (to find its place under the sun...). But imagine a Vermeer hanging in a garage: It would suffer. The transparent paintings are exposed to artificial light—to aggressive light.6 Backstage light. They are scrutinized and dissected. And, as in an x-ray, each painting MUST fail—fail its beauty—because nothing is hidden.

Adele Röder. COMCORRÖDER. En-Lightening / En-Visioning / En-Signing “How to overcome the rigidity of fabric, it’s inanimate material being, regular and abstract, and unfold its possible forms projected onto a woman's body [a world’s surface?] How to obtain plastic effects that can highlight, without the use of touch, the metric features of weave, thickness, weight and color? How to proceed from the idea of De-Sign towards the idea of En-Sign?7


1 Ei and Tomoo Arakawa. Tomoo runs a suntanning business named Blacky (near Fukushima).
2 (3 units = 1 table)
3 for BLACKY Blocked Radiants Sunbathed from Glow Rod Tanning Series by Kerstin Brätsch for DAS INSTITUT and UNITED BROTHERS
4 ...this invented world, / ?The inconceivable idea of the sun.” (cf. being in the right light)
5 Poussin on Caravaggio, “to destroy painting”
6 There are also cryptic aggressors in the paintings: hair, fishbone, fluff, spines...
7 pirate copied from Antonella Huber
www.giomarconi.com