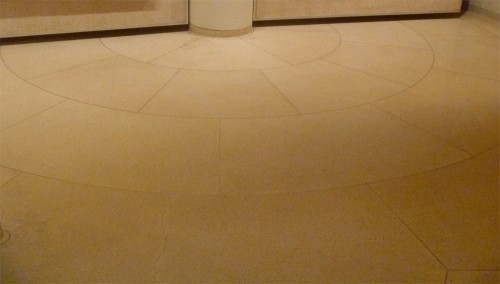 Gambaroff’s work addresses the production of painting and asks what painting could be today through a dissection, deconstruction and re-evaluation of its place in contemporary visual culture. The customs, expectations and myths that painting brings along with it are explored using new and old techniques and traditions.
Everyday materials and informational noise are mobilized as the main elements of Gambaroff’s recent work. Newspapers, covers of glossy magazines and advertisements are bonded using paint and italicized brush strokes. This writing gesture, deprived of meaning, is tearing through the layers of daily information. By mixing together fragments of images, words and colors, he plays with the language of mass media in its everyday existence. Canvases combined with elements extraneous to the traditional painterly practice – stools, shelves and other domestic furnishings – create new assemblages where painting expands into the realm of sculpture.

Gambaroff concerns himself with the problem of context, both in terms of architectural elements and ideological questions. The display will always necessarily be conditioned by the viewer, their movements in and around a space finding new viewpoints and creating new compositions or threads of meaning. This allows for the work to be extended not only in terms of its references but also materially, as objects that depart from their original premises and intent.

For his exhibition at Giò Marconi, Gambaroff will use the whole ground floor of the gallery to present a new body of work, with paintings and sculptural elements produced especially for the occasion.


Nikolas Gambaroff was born in Germany in 1979, he studied at Universität der Künste in Berlin and graduated in 2007 from the MFA Program at Bard College in New York. He currently lives and works in New York.