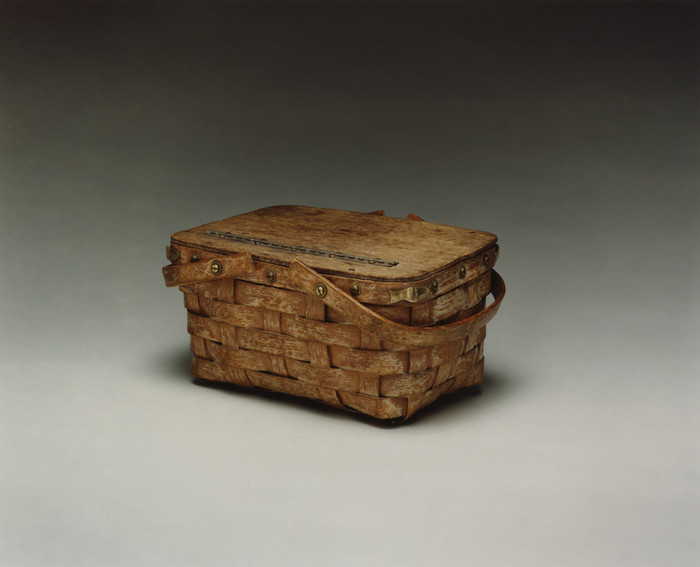 Lockhart creates films and photographs that are at once rigorously formal and deeply humanistic, meticulously observing the details of everyday life while also exploring the limits and intersections between the two mediums. In 2008, Lockhart spent the year in Maine and for a period of several months she observed and engaged the workers at Bath Iron Works, where she forged collaborative relationships throughout the shipyard. The films and photographs produced from this experience focus on these workers during their midday lunch break.

The centerpiece of the exhibition is Lockhart’s film "Lunch Break", which consists of a single, slow-moving tracking shot down a long and seemingly endless interior corridor. To create the film, Lockhart recorded a ten-minute walk-through – her first use of a mobile camera – then employed digital technology to stretch the film’s length to eighty minutes. The result is a meditative reflection, devoid of sentiment, on life in the factory during the midday break. The subjects’ activities vary: some read, others sleep, talk or eat. Some gather in groups, while others spend their time in solitude. The soundtrack of the film consists of machine sounds mixed with voices that slowly and dramatically swell up and down to keep the viewer in heightened suspense of what there is to come.
The film is shown as large-scale installation.

Different series of photographs accompany the film.
The first, made up of single images, diptychs or triptychs portray the workers’ lunch boxes, emphasizing the ways in which stickers, labels, contents, and minute details of wear and tear suggest the personalities of their owners and their particular relationship with their work.
The second series consists of carefully composed images of workers lingering around lunch tables, at once recalling and revising historical traditions of group portraiture.
The third series is devoted to the independent businesses that exist within the factory – makeshift booths where workers sell snacks, coffee, and other items to their colleagues.
Last but certainly not least the series of 8 beer bottles “Eight Samples from James Benning’s Beer Bottle Collection” sums up the whole Lunch Break cycle.

Created within the political and economic context of global capitalism in the twenty-first century, in which the industrial working class of the United States is shrinking if not disappearing altogether, Lunch Break captures a moment in time that may soon become a thing of the past.

The installation will occupy the ground floor of the gallery space. "Lunch Break" is Lockhart’s second solo exhibition at Gió Marconi gallery.
www.giomarconi.com