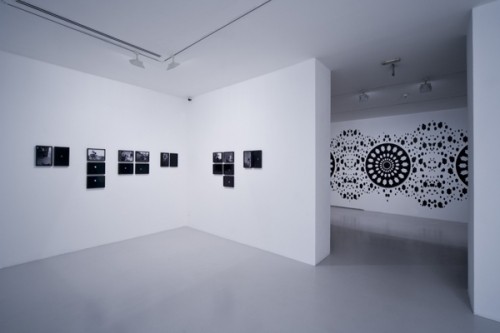 Giò Marconi Gallery is pleased to present the group show SOLARIS, curated by Cecilia Alemani.
Borrowing its title from the cult sci-fi novel by Stanislav Lem, Solaris presents the works of ten international artists, many of whom are exhibiting in Italy for the first time. Set on a planet inhabited by an alien intelligence, the novel Solaris depicts a world in which desires come true in the form of hallucinations. The researchers living in the orbit of Solaris are affected by a mysterious psychosis: their most painful memories, their sweetest passions and their repressed fears materialize as 'guests': these imaginary beings are perfect copies of the loved ones the astronauts had left behind on earth.
Hovering between the past and the future, the artists in Solaris draw imaginary landscapes inhabited by fictional creatures, dreamy visions and hypnotic forms. Appropriating traditions that range from op art to psychedelia, from modernist architecture to documentary cinema, the artists in this group show – all more or less in their thirties – seem to be exploring new, possible worlds in which hidden memories and prophecies of future civilizations come to the surface.
By juxtaposing the nostalgic films of Italy-born Rosa Barba – whose work is also included in this year!s Venice Biennale – to the desolated ruins of Croatia-born David Maljkovic, and by mixing the fractal geometries of Swiss artist Philippe Decrauzat with the multiple identities of American artist Ryan Trecartin, the exhibition composes an atlas of a new geography of desire. American artist Lisa Oppenheim presents a series of images of sunsets photographed by US soldiers in Iraq, while Greek- born Maria Antelman inspects the surface of the moon before it was violated by human presence. The
collages of Cypriot artist Haris Epaminonda, who recently exhibited at the Sharjah Biennal, portray scientists and speleologists exploring the depth of the earth.
An atmosphere of cosmic amazement pervades the exhibition, which includes more than thirty works presented on two floors of the gallery. Precious inlays of abstract whirls and auratic images appear in the large drawings of German artist Kerstin Brätsch. In the linen silkscreens by Australian artist David Noonan – who was featured in the last Tate Triennial - masked faces alternate with twisted bodies. The installation of the American artists Lizzie Fitch and Ryan Trecartin explode in a new theater of the absurd, in which avatars, clones, and other genetically modified creatures continuously change their sex and identity, following the uncontrollable stream of their dreams.
The exhibition is curated by Cecilia Alemani, an independent curator who lives in Milan and New York, where she is Curatorial Director of the new not-for-profit space X. She has recently worked on the exhibition Italics. Italian Art Between Tradition and Revolution, 1968-2008, curated by Francesco Bonami at Palazzo Grassi in Venice (2008) and at the Museum Of Contemporary Art, Chicago (2009). From 2007 to 2008, she served as Curator of Special Projects for Artissima, Turin, Italy. She is a regular contributor to Artforum.com, Domus Magazine, and Mousse Magazine.
www.giomarconi.com