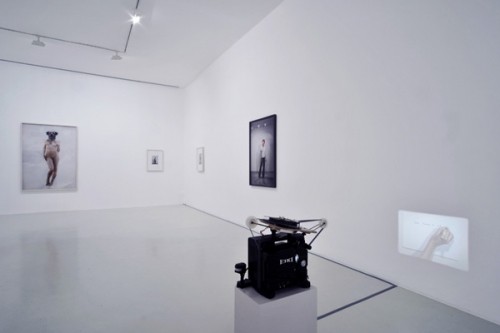 © Vibeke Tandberg
Exhibition view
VIBEKE TANDBERG
"The Hamburger Turns In My Stomach And I Throw Up On You. Liquid Hamburger. Then I Hit You. After That We Are Both Out Of Words."

On Thursday, the 29 of January, Gió Marconi is pleased to present the third solo exhibition of Vibeke Tandberg at the first floor of the gallery.
The artist reached notoriety in the 90's working with photocollages. Tandberg uses scissors as a tool of production, combining manual dextery with digital technics. The subjects are often associated with identity, female beauty and its reproductionsʼ sterotypes, but they are always rooted in Tandbergsʼ personal experiences and often have the artist herself as model and protagonist of the works.

The exhibition's title comes from a sentence of 'Loveletter', 16mm film which is the centerpiece of the show. It shows the artist's hand writing a kind of poem consisting of short sentences that are constantly changed and adjusted, thus making the progress of the poem and the film. The story we take part in is absurd and surreal, centering around a fading passion between two people as life progresses. The film is a point of departure for the show both in content and absurdity.

The other works presented in the exhibition are all collages in different ways, either straightforward, or scanned and enlarged, or results of mixed techniques including drawing. They are based on photographs, either found ones from internet and magazines, or selfportraits. They are an expansion of the film in many ways, and the titles of the images come from sentences or phrases that appear in the film such as: 'Liquid hamburger', 'It's like being an oyster'.
The show is a result of a play with techniques, words and images. It is a step away from conceptual working method that Tandberg used to practice, coming out in works that are more a result of nonverbal decisions.
www.giomarconi.com