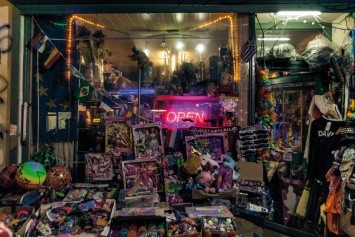 YES WE’RE OPEN will be opening on Thursday 19th February at Giò Marconi. This group show will mark the fact that the Milanese gallery is moving premises to a new space at via Tadino 20 to celebrate its twenty-fifth anniversary in business.

It will be displaying works by twenty-five of its own artists – Franz Ackermann, Atelier Van Lieshout, Trisha Baga, Rosa Barba, Will Benedict, John Bock, Kerstin Brätsch, Matthew Brannon, André Butzer, Nathalie Djurberg & Hans Berg, Günther Förg, Simon Fujiwara, Nikolas Gambaroff, Wade Guyton, Allison Katz, Annette Kelm, Sharon Lockhart, Oliver Osborne, Jorge Pardo, Tobias Rehberger, Markus Schinwald, Dasha Shishkin, Lucie Stahl, Grazia Toderi, Francesco Vezzoli, Fredrik Værslev and Amelie Von Wulffen –Giò Marconi is celebrating an important career that began in 1990 working alongside his father Giorgio after first gaining some experience at Studio Marconi 17, an initial experimental workshop space run by Giò for young artists, critics and people working in the culture industry. Over a period of twenty-five years since it first opened, the gallery has developed its own consistent approach to exhibiting, combining brave choices well ahead of their time - such as the first solo exhibition by the Chapman brothers in Italy held in 1996 or the retrospective on Martin Kippenberger held in 1990 - with continual talent scouting work aimed at discovering the most interesting up-and-coming artists on the international scene and a focusing on past artists, who worked with his father at Studio Marconi until 1992.

Deeply rooted in Milan's own history and future, Giò Marconi gallery is now moving to its new location in Via Tadino 20, inside a space that has been totally redesigned by KUEHN MALVEZZI, a Berlin-based firm founded in 2001 by the architects Simona Malvezzi and Wilfried and Johannes Kuehn, which specialises in designing exhibition-museum spaces and installing public-private collections from all over the world.

The graphics for the YES WE'RE OPEN exhibition were designed by Chris Rehberger, the founder of Double Standards Graphics Agency based in Berlin, who has already worked with artists, museums and contemporary art foundations from all over the planet and who has been working with Giò Marconi Gallery since 2003.