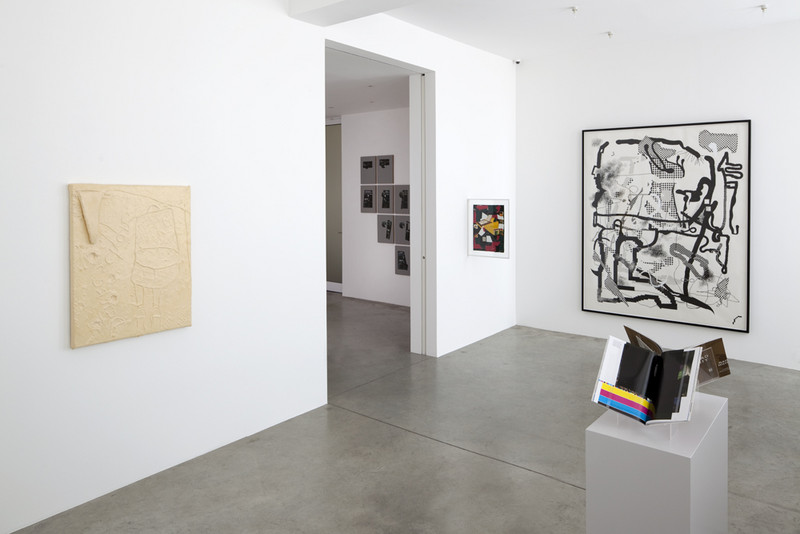 So the group show is meant to be an introduction of my work to the gallery. Regina and I organized it together and I decided to contribute a new multi-paneled work made by reproducing an advertisement for Pioneer featuring Andy Warhol. The panels can be dispersed between rooms, used to create different rhythms and modes of pacing or used to divide works or bring together other works. The piece is a kind of a curatorial tool; there has always been a part of my work interested in that.

I asked Walead Beshty to include a book in the show. The book is titled Damiani and is part of Walead’s Make-Ready body of work. So much of the preparation for the show happened long-distance, over email, and I tried to scan an image of the book to show Regina, but it was too big for the scanner and my image of it looked like shit. The Damiani book was printed commercially with the same CMYK color model I use in much of my work. The colors are so rich even though the actual pages are made from printer proofs, filled with errors and over-lapping images—it’s arbitrary yet somehow precise. In my work, I hand print the process colors myself and the colors are always getting fucked up, but I like that.

My work, unlike the Damiani book, is silkscreened. This particular image of Warhol posed with a Pioneer turntable is reproduced on panels which were first screenprinted with a Pantone Grey basecoat. I then complicated the CMYK color process by printing a run of white, instead of the usual black, as a key plate.
In each panel, the image of the Pioneer advertisement has been slightly modified using a 3D rendering program called Rhino.

I am excited to see the panels divided and spread throughout the space, creating multiple configurations and interacting with so many works. In the advertisement Warhol is relaxed, taking it easy. I like thinking of him spread about different rooms, hanging with the gallery’s history and inventory. Regina and Marco, who also works at the gallery, helped figure out the arrangements of the panels and what works might go next to my Warhol Pioneer reproductions, works as diverse as a Günther Förg or a Charline von Heyl, a Franz West or an Albert Oehlen. An untitled Laura Owens painting will hang on top of Stephen Prina’s Grey Card across the way from one grouping of the Warhol panels. The Pantone Grey in the panels is perfectly smooth and seductive, while the photographer’s grey of Prina's work records all the roughness and texture of the wall it’s painted on.

The image for the invitation card is a four-color reproduction of a Kodak photograph. I think it is from an old reflex camera. I am not sure; Christopher Williams would probably recognize the format. The actual photograph measures
9 x 9 cm. It is a very ambiguous image and to me feels like it could have been chosen by several of the artists included in the show. The image is of banana about to ripen. My father had carried a banana tree to Columbus, Georgia from some tropical location. He started growing the tree after he returned from Vietnam or Korea. I don’t know the exact details. I was so small when he was trying to grow it, but I do remember the tree and the bananas very well. The climate was not at all tropical in Columbus, Georgia and my dad built a tent around the tree from all the old army sleeping bags he had kept from military duty. His entire life was spent in the military. He would keep heaters running all winter so that it maintained a tropical-like temperature inside the structure he had built. Georgia had freezing winters. I found the photograph in an envelope filed away by my father. The image caught my attention because I had forgotten all about the banana tree and the bananas. I liked forgetting and then seeing the image again.

The title for the show is borrowed from a line I read in a book about rhythmic subjects and uses of energy in the dances of Mary Wigman, Martha Graham and Merce Cunningham.