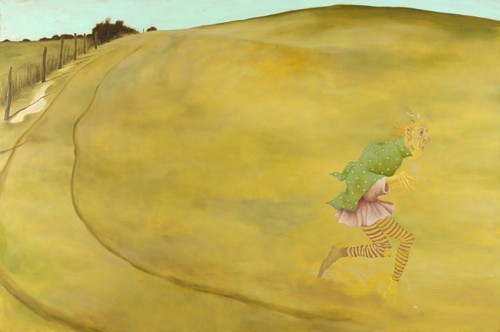 "Wüstung und Wüste" is the third exhibition by Uwe Henneken at Galerie Gisela Capitain. The artist is showing seven new oil paintings on canvas, varying in size and format.
Uwe Henneken’s work moves between symbolism, romanticism and expressionism. His landscapes are distinctive – here in his newest works they are deserted and uninhabited. Only in one, a very large-scale work, The Frontier People – Handkerchief Tree, there is a fabulous figure who, flying and visually whooshing through the painting, seems to abandon it.
Wüstung und Wüste are to be understand as opposite couples – like Negative and Positive. They describe Uwe Henneken’s “Bildwelt” (or picture world) in its contrariness. The idea of Wüstung (an abandoned, lost village) stands for the settlements that were abandoned before the modern era. Therefore it corresponds to the end, in which at first the desert is hostile to life, but can nevertheless on the other hand be a start of things.
It is comparable to a hermit’s experience, who finds himself in the solitude of the desert and reaches a spiritual level. The desert is the origin of the three big monotheistic religions. The work Rekluse am Rande der Sketis captures this idea. In the second half of the Fourth Century, in the ascetic desert, one of the basic forms of Christian monasticism emerged from a community of hermits, the roots of our European culture.
The idea of “Wüste” (desert) appears moreover in Ernst Jünger as a description of clarified Modernity that has lost its reference to transcendency and tradition. Start and end, blossoming and decay – this endless cycle drags on through all cultures. In this way "Wüstung und Wüste" serve as symbols of loss and return.
Through the absence of the otherwise characteristic beings in Uwe Henneken ́s work arises something quasi-new: the beholder itself becomes the figure.
www.galeriecapitain.de