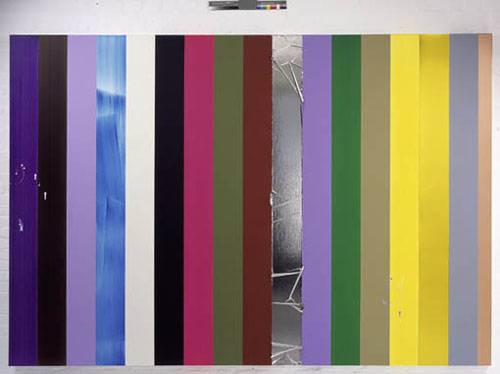 One picture – One sculpture

In his third solo exhibition at Galerie Giti Nourbakhsch, Anselm Reyle shows one large scale painting and one chromed and varnished bronze sculpture. The origin of both pieces of the exhibition can be traced back to findings.

Anselm Reyle started his stripe paintings in 2001. They distinguish themselves by their intense choice of colours and particulately dissonant combinations, especially with neon colours.
Some paintings contain just one stripe of oil paint, the sky blue one, the others being comprised of composite acrylic paint. In the course of time Anselm Reyle added silver foils as well as plain and tinted mirror foils, them being ruffled and waved, the edges uncut. Their reflections mirror their surrounding.

Reyle creates a composition of colour spots and tin marks which, though steady in formation, appear to be randomly set in various colours. They reveal themselves as a serial module in his stripe paintings.
On the determined field of his stripe paintings, Reyle expands his potentialities to create colour harmonies and rhythmic atmospheres. The larger the format, the more the spectator experiences the variety of the particular colour harmonies as a physical sensation. This way of stripe painting must be acknowledged as a finding of the recent history of painting such as the drippings, the monochromes or gestured, informally applied paintings, which arise simultaneously.

Origin of the sculpture is a small, approximately 15 cm long, folklore souvenir of African handicrafts. Extremely enlarged (up to 245 cm height), cast, chromed and varnished, it experiences a metamorphose into a predominant figure with corresponding new attributes, leaving its origin as nothing but a disconcerting shadow of itself. The powerful, chromed surface consumes, distorts and mirrors the entire surrounding, every movement and hence, the actual reality, even of the painting.

Like the varnished partly with neon lights equipped cartwheels or the neon yellow varnished hay-waggon, the chromed hay balls, the violet coloured winepress or the strobe lighted and painted lamps, this object is extricated from its context and transferred into a synthetic space between art and life. The practical value remains as a memory.
The title of the exhibition „Life Enigma“ is a song title by violinist Jean-Luc Ponty.