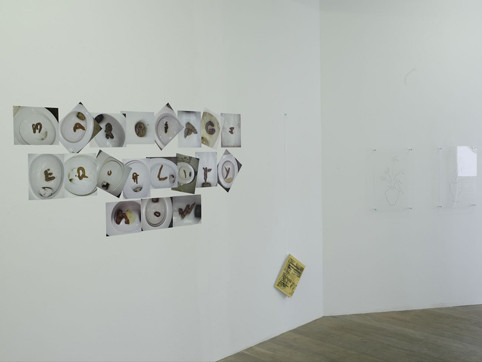 Parallel to Karl Holmqvist's exhibition is a group exhibition curated by the artist MARRIAGE EQUALITY NOW with text based works dealing with translation of different types. Made in USA from the Paris based artists' collective Claire Fontaine, turns a phrase from the said rare Godard film into a smoke graffitoed ceiling drawing. The Kakabet created by Vienna based artists' collective Gelitin quite simply forms letters from shit, and is in turn used to write the exhibition title on the wall. The Pitctures Of Flowers from the New York based artist Fia Backström, uses a reverse method in forming images of flowers from the phrases taken from thinkers such as Rosa Luxemburg, Martha Rosler and Hans Ulrich Obrist and Herbert Marcuse respectively. Also from Fia Backström is a framed text that deals with the polarity between left and right. Finally the artist's books included from Paul Chan, an artist also based in New York translates each letter in the alphabet into a phrase, and while retyping works by Plato, Gertrude Stein and John Maynard Keynes turn them into extended accounts of sexual arousal (Pron). The books and fonts are to be found downloadable for free on the artist's website www.nationalphilistine.com. Because language is communication, how we form opinions and relate to each other and the world around us. It's what makes us human.
www.nourbakhsch.de