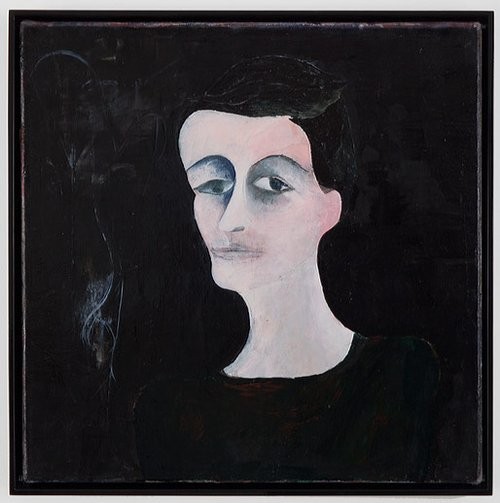 Gladstone Gallery is pleased to announce an exhibition of new work by Andro Wekua. Creating vivid yet enigmatic tableaux composed of painting, sculpture, collage, and film, Wekua’s work explores notions of memory, history, and desire through a mixture of personal iconography and fragmented narrative. Often depicting figures wearing masks or with their eyes blinded, the young men and women seem haunted by their very surroundings—surroundings which recall both the turbulent recent past of Eastern Europe and the stylized decadence of popular culture.

For this exhibition, Wekua has created paintings and works on paper depicting individuals from his past that had an influence or impact on various stages of his life, despite not having seen some of them since his adolescence. These portraits blur the lines of tradition by combining aspects of the subject culled from photographs and memories of different points in time: what begins with capturing one moment finds its completion in representing the same person years later. At other times, Wekua will start by painting one individual until he has exhausted his memory and then adds details of another person. These paintings, at times surreal, intermingle figurative and abstract renderings recalling the very phenomenology of remembering: the condensation and screening of memory and the contradiction between personal reminiscence and history. Installing these pieces in spaces lined with wallpaper of his own design, Wekua creates a portrait gallery as hall of mirrors in which the atmosphere recalls both subject and artist simultaneously. In this exhibition, Wekua manipulates the history of a genre long dependent upon both the tension and contradiction of idealization and realism, or, as he says, “A lot of it is fictional but for me it’s all very truthful.”

Andro Wekua was born in 1977 in Georgia, and studied visual arts there and in Basel, Switzerland. He has been the subject of solo exhibitions at numerous museums, including Neue Kunst Halle, St. Gallen, Switzerland; The Rubell Family Collection, Miami; Kunstmuseum Winterthur, Switzerland; Museum Boijmans van Beuningen, Rotterdam; Hydra Workshops, Greece; Camden Arts Center, London; the De Haalen Haarlem; and Le Magasin, Grenoble; and he has participated in various group shows including the 4th Berlin Biennial in 2006. His exhibition “Workshop Report” is currently on view at Wiels, Brussels, having traveled from Museion in Bolzano, Italy.
www.gladstonegallery.com