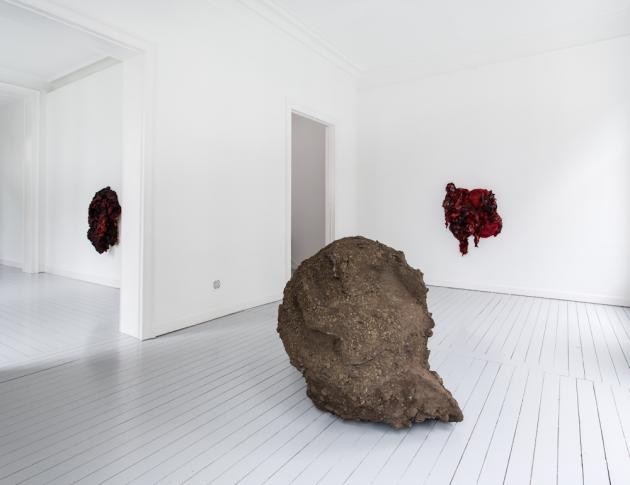 Gladstone Gallery is pleased to present an exhibition of recent work by Anish Kapoor. The exhibition includes a large-scale sculpture, Double Vertigo (2012), presented in the ground floor of a townhome at 6 Rue du Grand Cerf, adjacent to the gallery. Double Vertigo is comprised of two curved, reflective stainless steel planes that alter spatial perception and create the illusion of standing in an infinite expanse. This effect engenders a sense of awe and emptiness that Homi Bhabha has described in Kapoor’s work as “the contrary, yet correlated forces of withdrawal and disclosure.” The exhibition also features work in a wide range of mediums, offering a unique opportunity to see the myriad materials and methods that Kapoor has explored throughout his career, at scales both intimate and monumental.

In several works, the artist uses materials such as silicone, resin, wax, and earth to create organic, gritty forms. While the surface of these sculptures contrasts with the polish of the mirrored works, they function similarly as explorations of depth that imply cavernous interiority and indeterminate sense of dimension. The exhibition also includes a series of gouache drawings, an integral aspect of Kapoor’s practice. As in many of the artist’s sculptures, the drawings are heavily layered with material. To perceive the richness of pigment on the paper, one’s eye must move in and out of the material depth, feeling the push and pull of hues bleeding into one another and of indefinable shapes coming to form as both contingent matter and restless proposition.

Anish Kapoor was born in 1954 in Bombay, India, and has lived and worked in London since 1973. Major solo exhibitions of his work have been presented at the Museum of Contemporary Art, Sydney; Le Grand Palais, Paris; National Gallery of Modern Art, New Delhi; Museo Guggenheim Bilbao, Bilbao; the Tate Modern, London; Fondazione Prada, Milan; Kunsthaus Bregenz, Bregenz; Museo Archeologico Nazionale, Naples; Haus der Kunst, Munich; and the Institute of Contemporary Art, Boston. Kapoor received the Premio Duemila for his British Pavilion at the Venice Biennale in 1990 and the Turner Prize in 1991. In June 2015 the Château de Versailles will present a solo exhibition of his work.
www.gladstonegallery.com