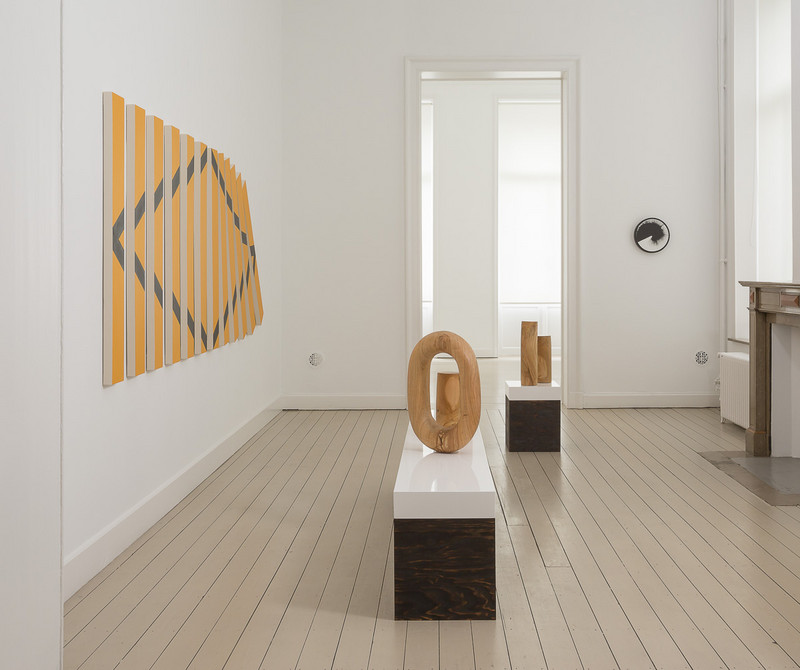 Gladstone Gallery is pleased to present the gallery’s first solo exhibition at our Brussels location with Swiss artist Claudia Comte. Drawing on myriad sources, from architecture and design to nature and popular culture, Comte creates paintings and sculptural works that playfully explore the relationship between material, space, and form. Comte began painting at an early age, producing her first formal series in 2001. Titled, “Our Most Wonderful Years,” the paintings are photorealistic portraits of her childhood, depicting family vacations, birthday parties, and other memorable moments from her youth. Comte has since developed a formal style that tends towards abstraction, bringing together geometric forms, amorphous shapes, and figurative elements, to create a diverse body of work that incorporates multiple media. Often creating site-specific works, Comte investigates the way artwork can transform a space, combining surprising materials, textures, and colors to turn a static room into a dynamic environment.

The exhibition comprises three series of works, which are installed in a collage-like manner, nearly covering the walls and filling the floor space to create an immersive environment for visitors. The first series, a collection of ten wooden sculptures carved from the trunk of an eighty year-old cherry tree, represents a continuation of Comte’s ongoing work with wood. Comte manipulates the wood with a chainsaw, typically in the place in the woods in which it was found, creating a sculpture that develops a type of personage or character as she works on it. For this most recent series, which is mounted on pedestals that are half glossy and half burned, the tubular sculptures have a letter-like quality, and, taken together read as an abstracted alphabet.

The second series, a collection of “Cocktail Paintings," are inspired by Comte’s favorite bar in Berlin, a place known for its extremely precise drink recipes. Composed of eight brightly painted canvases, the “Cocktail Paintings” represent a melding of painting and sculpture. Comte paints the eight individual canvases as though they were one work, then separates and reassembles them, creating a modular work that can take on a new form each time it is installed. Finally, the exhibition includes a collection of “Circle” paintings, composed on a white circular canvas and painted with black acrylic. Each work consists of one gesture, which appears simple, yet hints at a larger meaning. Inspired by the cartoons of her childhood, in which a single black line could convey numerous movements, the works explore the way in which a simple brush stroke can express complexity.