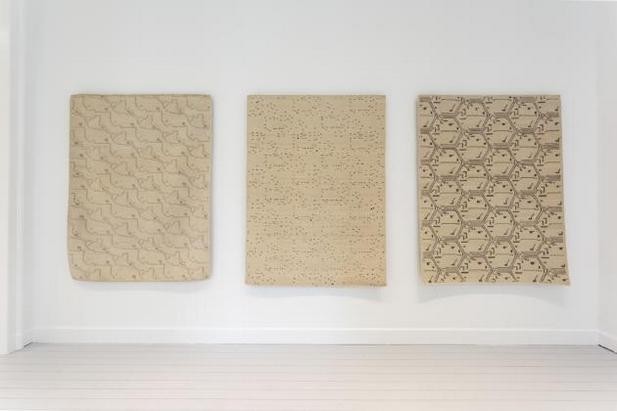 Gladstone Gallery Brussels is pleased to exhibit new works in textile and ceramic by Damián Ortega. Beginning his career as a political cartoonist, Ortega has a longstanding interest in teasing out the underlying social and political narratives embedded in even the most commonplace materials. Fascinated by systems of construction and distribution, he analyzes the formal relationship between individual parts and their larger whole by deconstructing familiar objects to create new spatial arrangements and enabling each component to be analyzed and reconsidered. Creating works that are at once playful and deeply provocative, Ortega investigates the way things come apart, yet remain fundamentally connected.

With this exhibition, Ortega will show a new body of textiles for the first time. In development for over two years, the artist collaborated with different work shops in Mexico City, Oaxaca, and San luis de la Paz, Guanajuato, all of whom incorporate wildly differing materials and techniques. This suite reveals systems in both process and form: Through a range of subjects, from the human body, to microchips, to maps, Ortega elucidates processes of interconnection by creating reticles and grids. These textiles depict complex amalgams of the temporal, spatial, historical imagery, both representational and abstract. The artist writes, “I have been experimenting with ways of measuring time through weavings...textiles are marked by amounts of work, and the time of the work being done is also marked by the body’s rhythm. Some of my textiles are a system for measuring time, something of a music score, a calendar or a code.”

In addition, Ortega will exhibit a new body of ceramic work that remarks on his interest in craft and the traditions of popular folk culture, including rows of baked brick with serpentine forms interrupting or uniting the grid and aerial topographic maps in circular flats of clay. In a particular grouping of fired clay sculptures, Ortega recreates dried ears of corn to explore complex systems of biodiversity, tracing how random patterns of genetics color individual kernels differently. These intricate designs marked on the ear of corn become an unknown code, transforming common agriculture into a form of technology and the medium of codified information.