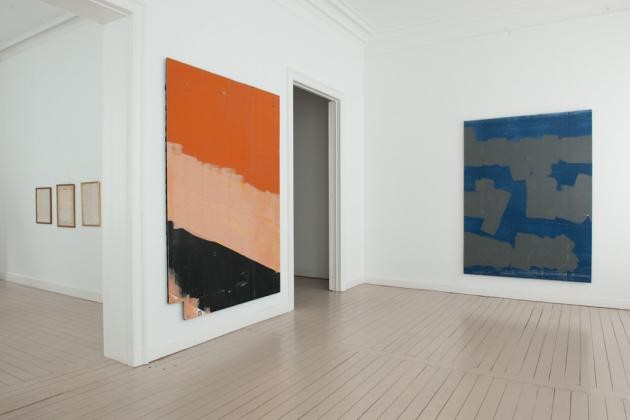 Gladstone Gallery is pleased to present an exhibition of new work by Gedi Sibony. For this exhibition Sibony presents a selection of eight sculptural works that he has extricated from the world, as well as one progressively built up in the studio.

Three pieces have been removed from tractor-trailer vans, where the corporate name of the previous owner has been painted out by the second owner’s use as a storage trailer. Painting out the specific name in the most efficient way possible leaves evidence of a purposeful hand, and Sibony lets happenstance thrive on its own--a space once identified is now set free.

In the next rooms sit a more domestic mise-en-scène: a half painted Victorian radiator migrates away from the wall and three framed works with the previous artwork reversed expose various pragmatic taping operations of the framer. A crushed birdcage hangs in the background and in the center, flecked in the gold of all the other works, is a shrouded figurine -- the entire affair a magic twinkle in her eye.

Throughout his career, Sibony has played with the formal and psychological expectation of a gallery exhibition. This exhibition reflects his continued meditation on this concept, heightening the intention of ready-made objects, and exploring the possibilities for what constitutes an artwork