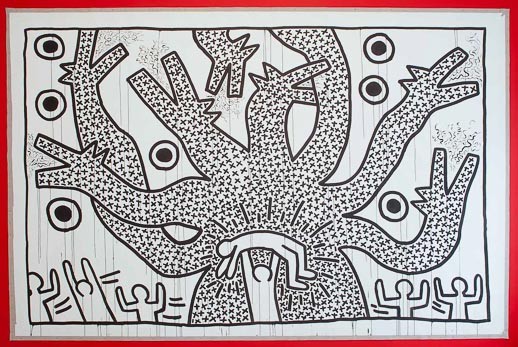 Gladstone Gallery is pleased to announce an exhibition of works on paper by Keith Haring, made between 1978 and 1982. The show will include small and large-scale ink drawings from Haring's early career, works that feature some of his most iconic imagery. Detailing the years between Haring’s arrival in New York as a student at the School of Visual Arts and the development of his studio practice, this exhibition traces the evolution of Haring’s visual language and style, inspired by both the architecture and cultural environment of New York City.

A prolific artist known for his animated figures and pop-graffiti aesthetic, Haring was an integral part of the avant-garde downtown culture of New York in the 1980s. Using easily accessible imagery, Haring explored complex themes founded on culturally subversive attitudes toward sexuality, gender, religion, and politics to engage viewers in a dialogue about issues often not broadly discussed. Drawing on the graphic style of such artists as Pierre Alechinsky and Jean Dubuffet, Haring developed a dynamic mark-making technique that characterized much of his practice. During this early period, Haring became interested in exploring geometric forms and patterns, most notably the simplicity of the line, which became a foundational aspect of his work.

Keith Haring was born on May 4, 1958 in Reading, Pennsylvania and died at the age of thirty-one of AIDS-related illnesses in New York City. Since his death, his work has been the subject of several national and international museum retrospectives. Beginning this April, Haring’s work will be featured in a major retrospective at the Musee d’Art Moderne de la Ville de Paris, curated by Dieter Buchhart. In addition, his work is in major private and public collections, including, The Museum of Modern Art, New York; The Whitney Museum of American Art, New York; Los Angeles County Museum of Art; The Art Institute of Chicago; The Bass Museum, Miami; Centre Georges Pompidou, Paris; Ludwig Museum, Cologne; and Stedelijk Museum, Amsterdam.
www.gladstonegallery.com