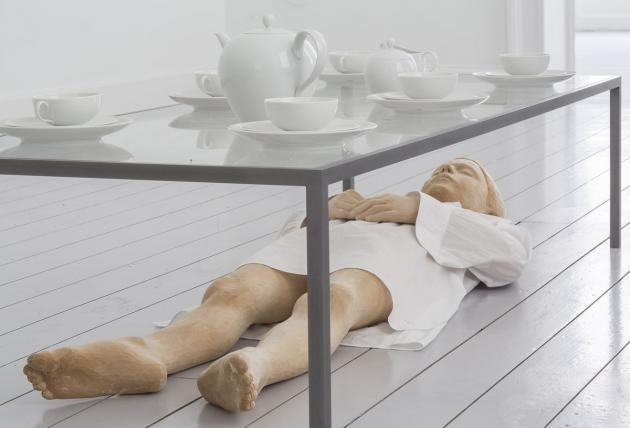 Gladstone Gallery is pleased to present an exhibition of new work by Paloma Varga Weisz. The exhibition includes a series of wood sculptures, held on floating shelves and in cabinets. Pragmatically designed and made of unadorned, untreated wood, these displays are seamlessly integrated into the historically domestic space of the gallery, which was originally designed as a family townhome. The objects they hold appear to be components of a memory or personal story, strung together in order to construct a narrative. In a single sculpture placed outside of these displays, a young child figure lies under a glass coffee table and looks up to a tea service arranged on it. The child is partly realistic, partly out of focus, as if it is the lingering presence of something that happened here in the past. Like a strong memory, it is temporally disconnected from the space in the present but continues to have a physical impact on it.

Gaston Bachelard wrote in The Poetics of Space, “In the wardrobe there exists a centre of order that protects the entire house against unwanted disorder.” Similarly, Varga Weisz’s shelves, cabinets, and sculptures seem to reveal a personal system of classification developed to keep memories in order. The effect of seeing a physical manifestation of this inherently psychological system is uncanny, as it simultaneously relies on and lies outside of time and space.

Despite the emphasis on systematizing, cabinet doors are left ajar and other, similar gestures suggest openness or incompleteness. They allude to the paradox of giving order to temporal experiences: though such ordering is essential, memories are inevitably altered by the progression of time, making a closed, complete system impossible.

Varga Weisz lives and works in Düsseldorf, Germany. Her work has been presented in major solo exhibitions at the Kabinett für aktuelle Kunst, Bremerhaven, Germany; the Douglas Hyde Gallery, Dublin; the Museum Morsbroich, Leverkusen, Germany (with Rosemarie Trockel); and Chapter Arts Centre, Wales. She has been included in group exhibitions at the Museum of Modern Art, New York; the Hayward Gallery, London; the Kunsthalle Krems, Austria; Kunstsammlung Nordrhein-Westfalen, Düsseldorf; the Venice Biennale; and the Berlin Biennale. She trained at Staatliche Kunstakademie, Düsseldorf.
www.gladstonegallery.com