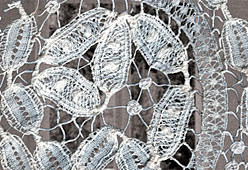 Gladstone Gallery is pleased to announce an exhibition of work by R. H. Quaytman. This exhibition will present a series of new works comprised of silk-screened paintings on wood panels that continue to follow the discursive logic of Quaytman's broader creative practice. Referring to each exhibition as a "Chapter," Quaytman’s terminology suggests an unfolding, inter-relational structure within the installations that determines both the overarching organizational principle as well as the mode in which the individual works are executed. In "Point de Gaze, Chapter 23," Quaytman further articulates the perceptual and durational experience of painting as an ever-shifting investigation of the inter-personal, historical, and architectural contexts of the exhibition's site and space.

Initiated by a period of research during which Quaytman looks to various textual sources to invoke or conjure her subject matter, each new chapter combines a set of three optical imperatives – looking into, looking at, and obscured or disrupted vision. Each approach uses specific technical strategies to ground the imagery in the formal act of looking. This new series compellingly takes up these modes and methods.

The artist generated work in this exhibition though exploring three subjects that progressively informed one another. The first revolved around a very small, geometric sculpture by Lygia Clark called Estruturas de Caixa de Fósforos (Matchbox Structures), from 1964, in Barbara Gladstone’s private collection. Situating this diminutive work in an open box bisected by a mirror, Quaytman playfully disrupts the autonomy of the sculptural object by visually and materially reframing its perceptual possibilities. From this study, Quaytman produced several black and white Polaroid pictures, which were used for the silk-screened images in many of the paintings on view.

The second and third subjects emerged while installing I Modi, Chapter 22 in Venice, through a conversation with an art historian, who introduced a little known exhibition catalogue from 1994 entitled, “Le jardin clos de l’ame” organized by Paul Vandenbroeck in Brussels. Typical of Quaytman’s approach, reading this book led to further investigations into the cultural history of the Beguines, a Roman-Catholic laic order of women active in the Netherlands in the 13th and 14th Centuries. This semi-monastic community operated outside the social norms of traditional convent life and often took an unconventional approach to religious spirituality, producing the first mystical writings of the period. The motifs in several of the related paintings were inspired by a group of Beguines’ reliquaries of ornate head-pieces, which Quaytman very loosely replicated and shrouded over three people. While Quaytman’s simple construction masks the identity of each individual, the artist alludes to the importance of the exhibition’s location by incorporating a Brussels resident. The third subject Quaytman turned to was the history of lace-making in Belgium, which was produced by the Beguines as a source of income. The title of the exhibition takes its name from a form of delicate needlepoint lace that first originated in Brussels and was referred to as “Point de Gaze.”

Together Quaytman’s paintings interlace these rich histories, generating a network of associations that move deftly between the perceptual conditions of viewership and the referential power of the images.

R. H. Quaytman was born in Boston in 1961. The artist has been the subject of solo exhibitions at museums and institutions including: Kunsthalle Basel, Switzerland; Neuberger Museum of Art, Purchase, NY; San Francisco Museum of Modern Art, CA; and The Institute of Contemporary Art, Boston. Quaytman’s work has been included in group exhibitions at: CCS Bard Hessel Museum of Art, Annandale-on-Hudson, NY; Sculpture Center, NY; Bergen Kunsthall, Norway; and MoMA PS1, NY. Quaytman was included in the 54th Venice Biennale in 2011 and the Whitney Biennial in 2010. The artist currently lives and works in New York.
www.gladstonegallery.com