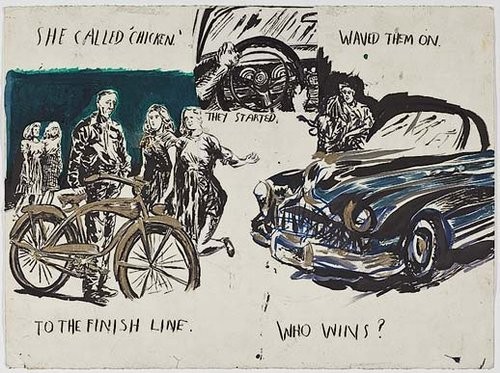 Gladstone Gallery is pleased to announce an exhibition of new work by artist Raymond Pettibon. Long recognized for his singular works combining text and figuration, Pettibon merges disparate elements of American iconography, re-inscribing strange and often obscured meanings into normative narrative structures reminiscent of comic strips and advertising. Emerging from the Southern California punk culture, where he was closely associated with the legendary band, Black Flag, Pettibon’s works on paper, wall drawings and films, capture the underlying forces that dominate and determine the conditions of the American psyche.

In this exhibition of new works, Pettibon continues to expand upon strategies of collage, drawing, and painting that conjure earlier established themes and imagery mined from a myriad of sources including, Noir and B movies, cult icons, literature, television, political propaganda, and old comic books. This broad range of historical references not only foregrounds Pettibon's own interest in appropriating past visual and literary styles, but also invokes the schizophrenic and pathological impulses at work in the American imaginary. Cultural relics such as Gumby, Charles Manson, the atomic mushroom cloud, and the dollar sign, regularly appear, meticulously coupled with Pettibon’s textual insights inspired by William Blake, vernacular speech, and pulp magazines. As the use of color has played an increasingly central role in these more recent works, so has the formal concern for surface, space, and technique, resulting in densely populated and fragmentary images that further articulate Pettibon's refusal to offer conventional narrative logic. Often at once perversely funny and poetically contemplative, Pettibon's power lies in his ability to occupy multiple positions at once, and ultimately to implicate text and image in a slippery production of meaning.

Born in 1957 in Tucson, Arizona, Raymond Pettibon received his BA at UCLA in Los Angeles, California. Pettibon’s work has been the subject of numerous solo and group exhibitions throughout the U.S. and abroad, including the Whitney Biennial, Louisiana Museum of Art, Denmark, Walker Art Center, Minneapolis, The Philadelphia Museum of Art and the Museum of Modern Art, New York. Pettibon was the recpient of the 2004 Whitney Biennial Bucksbaum award and the 2010 Oskar Kokoschka Prize. Pettibon currently lives and works in Hermosa Beach, California.
www.gladstonegallery.com