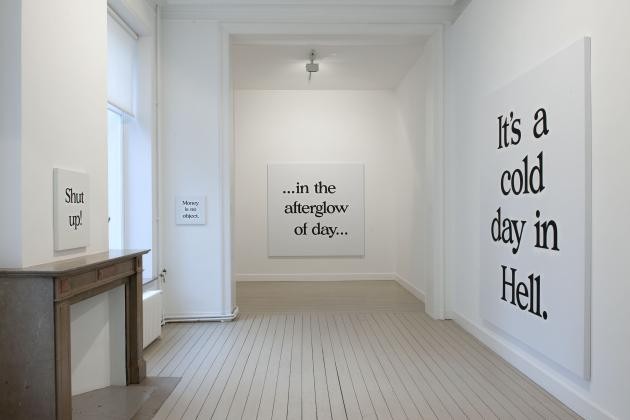 Gladstone Gallery is pleased to present the first exhibition with Ricci Albenda at our Brussels location. Throughout his career, Albenda has taken a longstanding interest in the written word, utilizing letters to explore the ways in which language is simultaneously a visual, personal, communal, and intellectual entity. Albenda’s earliest paintings feature words or phrases superimposed over images, which combine language and imagery to create an abstract narrative. Over time, Albenda began to take a more directed interest in the language component of the work itself. By removing the imagery, Albenda was able to explore the compelling subtlety, precision, and simplicity of a black and white text, inspiring him to create works that contain only letters, foregrounded as the central image.

Yakkity Yak features a series of Albenda’s word paintings, which display familiar phrases and sentences, such as “I like you.” and “Shut up!” Created on canvases of varying size, the works, when taken together, distort the viewer’s perspective, as their shifting scales create an illusion of distance between the galleries. This intentional exploration of the way that people understand and perceive space evidences Albenda's ongoing interest in creating architectural interventions and sculptures that distort surfaces and initiate trompe l’oeil effects. The black of the text contrasts sharply against the white background, creating a dazzling optical effect that plays with the spatial relationships between the words, their backgrounds, and the gallery walls.

This is the first exhibition for Albenda in which every painting was conceived of to include phrases, rather than a mixture of single and multiple word works. This formal decision arose from an interest in capturing what Albenda perceives as the cathedral-like nature of the space, and a desire to create works that highlight the great verticality of the environment. Favoring vertical and square canvases over the horizontal ones that he more typically uses, Albenda feels that multiple word works were more conducive to his chosen canvas and better reflected the distinct nature of the gallery.

While the works, upon first glance, appear to be black text on white canvas, as viewers acclimate to the exhibition a subtle shading is revealed, which progresses throughout the exhibition: from warm tones inspired by the colors of daybreak; to multicolored washes reminiscent of the ever-changing light reflected off of trees, buildings, and other objects; to pale blues reminiscent of an open sky. From the vantage point of the last room, the viewer will be confronted by the spectrum-like effect of the works taken together as whole.