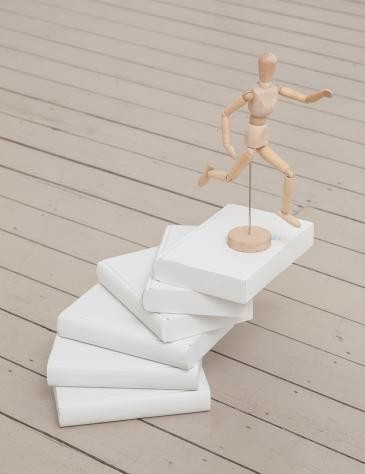 Gladstone Gallery is pleased to present a solo exhibition by Richard Aldrich at our Brussels location. The exhibition is being presented in collaboration with dépendance, which will host a concurrent exhibition on view April 24 through May 24. The two exhibitions feature paintings, drawings, and sculptures created over the course of the past decade that highlight Aldrich’s interest in the way in which objects can be used to explore the impact of time on our understanding of ourselves and the world around us. Through each work, many of which were created over the course of multiple years, or returned to after a duration of time, Aldrich provides a rich visual representation of the evolution of objects — how, as we age and change, our conception of the things close to us is altered as well. This notion is reflected in his works, which, even when finished, evince a sense of continuous becoming, suggesting the possibility of future growth and change.

Eschewing a particular art-historical definition of or vantage point from which to view his art, Aldrich sees his artistic practice as a constantly evolving force. Taken as a whole, his work defies a singular style, and in his drawings, paintings, and sculptures, Aldrich is able to move effortlessly between figuration, abstraction, and representation – often combining imagery variously inspired by people and places close to him, visual artists, writers, and musicians whom he finds interesting, and experiences drawn from his everyday life. Using a variety of techniques, such as thick and thin painting, removing portions of canvas from his work, and multi-media assemblage, Aldrich has developed an artistic style that turns away from the canonical understanding of art historically, in favor of exploring new conceptual processes through which to view the contemporary world as he sees it.

The works on view represent the broad spectrum of Aldrich’s practice and, when taken together, read as a microcosm that encapsulates a series of moments caught in time. Among the works on view are Reality Painting #6 (A Wall in My Bedroom) part of Aldrich’s ‘Reality Painting Series,’ a body of work that playfully adopts the art-historical idea of a series as a way to organize ideas, and which depicts scenes from Aldrich’s everyday life. Also on view is Stacks, a sculpture that brings together four elements of previously exhibited sculptures to create a new complete work. This piece reflects Aldrich’s interest in using re-contextualization to explore new ways in which objects can be engaged with and understood, an idea that is further expanded upon by virtue of the fact that this work was shown in his recent show at Bortolami Gallery in New York, and is now being revisited and approached anew. Among the works on view at dépendance are Untitled, a painting that is composed of a trilogy of novels from the Cyberpunk role-playing game universe Shadowrun, suspended from the canvas in mid-air, and the drawing One Kind of Sleight of Hand, which features the transparency that was used to create the painting Two bodies as One that was shown at dépendance in 2009.