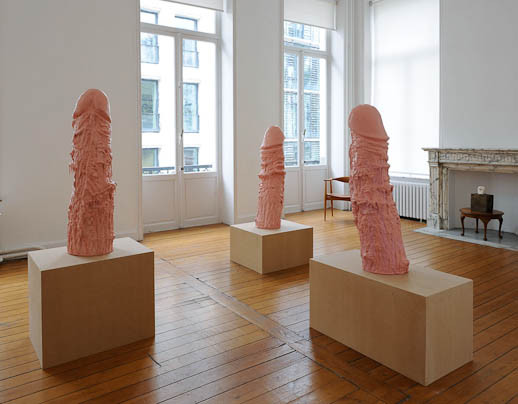 Gladstone Gallery is pleased to announce an exhibition by British artist Sarah Lucas. Since the 1990s, Lucas has been developing a unique material vocabulary using everyday domestic items such as stockings, clothing hangers, lightbulbs, and beer cans to create objects that challenge our collectively inscribed codes of gender, sexual, and social normativity. In this exhibition Lucas uses the male genitalia as her muse, capturing the tension between the representational and the abstract, while retaining the insistent and underlying anxiety imbued in her particular mode of the abject.

In this exhibition of new and older works, Lucas continues to explore the themes and ideas at play within her 2008 series of the same title, "Penetralia." Employing similar strategies of production, such as cast concrete, plaster, and fiberglass, these works engage the figure of the phallus with an intense formal clarity and wit. While the symbolic power of the phallus allows Lucas to play with an overt level of content and signification, she is also equally attentive to the basic conditions of the sculptural object implied in composition, weight, balance, and materiality. These aesthetic details animate Lucas' otherwise brute erections, rendering their contours, surface, and structure into an elegant and formal investigation of the phallus. Throughout her work, Lucas has both explicitly and suggestively conjured the image of the penis as both a controversial cultural icon as well as a banal human body part, remarking upon the male organ as the ideal stand-alone sculpture. In drawing parallels between the physicality of both the sculptural object and the male organ, Lucas slyly alludes to the shared history of power and preferences: verticality over horizonality, exterior versus interior, convex versus concave, visibility opposed to invisibility. Linguistic tropes and puns have consistently informed Lucas' multivalent and at times evasive layering of meaning, perfectly exemplified in the title "Penetralia," essentially defined as, "the innermost, the most private or secret parts." This title cleverly conflates its two inter-related terms, the penetrated (the "innermost") and the penetrator (the phallic object), by enacting a slippage in meaning between text and object.

A special artist's book by Sarah Lucas and Julian Simmons, made as a companion to the exhibition, will be available in a limited signed edition.

Born in Holloway, London in 1962, Lucas has been the subject of numerous major solo exhibitions both nationally and internationally including: Museum of Cycladic Arts, Athens; Kunsthalle Zurich; Milton Keynes Gallery, U.K.; and Museum Boymans-van-Beuningen, Holland.
www.gladstonegallery.com