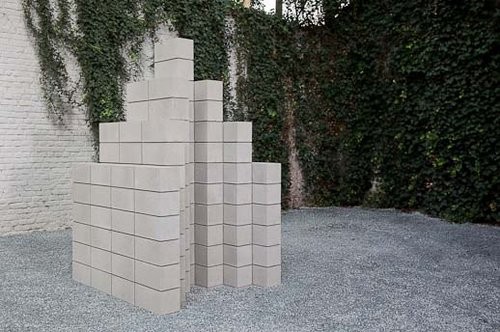 Gladstone Gallery is pleased to present an exhibition focused on a large-scale installation by Sol LeWitt that will occupy the two floors of the gallery. Long established as one of the leading figures in the Conceptual Art movement of the 1960s and ‘70s, LeWitt continually offered new ways of expanding the possibilities of the artist's role within the circulating channels of artistic creation, production and distribution. Through his vast body of works on paper, structures, and wall drawings, LeWitt makes evident the critical importance of methodology as a way of delimiting the field of artistic invention as well as conflating the expressive function of form, content, surface and support into a rationalist ideal.

Conceived in 1995, Wall Drawing #792: Black rectangles and squares underscores LeWitt's early interest in the intersections between art and architecture, which he distinguished and admired as a practice structured by predetermination, empirical logic, and collaboration. Spanning the two floors of the gallery, this major work consists of varying combinations of black rectangles, creating an irregular grid-like pattern that is representative of LeWitt's use of the elemental shapes and geometries found in the abstractions of the Bauhaus and Russian Constructivism. While aesthetically uniform, the differing scale, design, and dimensions of the gallery’s walls demand that each composition consider the unique architectural conditions of the site itself. On view in the garden is a concrete block structure from 2001, which acts as a compelling three-dimensional counterpart to the ideas demonstrated in LeWitt’s wall drawing. Motivated by this practical model of architecture, LeWitt developed a framework for identifying the artist as primarily that of a thinker bound to the processes of conceptualization rather than execution, a move that separated him from the romantic tradition of the artist as maker. Rejecting the ideological imperatives of Abstract Expressionism, LeWitt and his fellow allies established a counter polemic constituted by attitudes towards issues of non-hierarchy, repetition, and serialism, which centered upon the motif of the grid. Through both his elegant charting of the axiomatics of the surface space as well the stoicism of his concrete structure, LeWitt invites us to reflect upon the phenomenological effects of our unfolding experience, marking his continual insistence upon capturing the indomitable presence of the human mind.

Sol LeWitt (1928-2007) has been the subject of numerous major retrospectives at museums worldwide, including the Museum of Modern Art, New York; the Tate Gallery, London; the Kunsthalle Bern, and a long term exhibition of 105 wall drawings at Mass MoCA, Massachusetts on view through 2033, among other international venues. His work remains in the collections of countless prominent art institutions, such as the Solomon R. Guggenheim Museum, the Whitney Museum of American Art, and the Centre National d’Art Moderne Georges Pompidou.
www.gladstonegallery.com