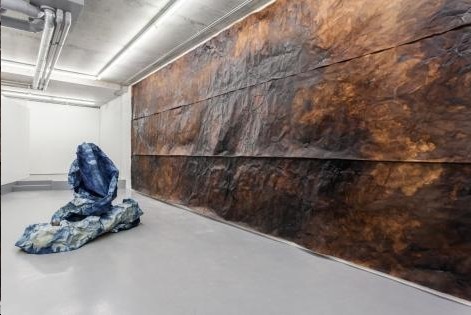 Martin van Zomeren is pleased to present ‘Kaki Kuchi’, the second solo exhibition of Adam Avikainen at the gallery. ‘Kaki’ and ‘Kuchi’ are Japanese words. ‘Kaki’ refers to the components of the works in the show and can have several meanings: ‘persimmon’, ‘oyster’ and ‘to write’. The translation of ‘Kuchi’ is ‘mouth’ or ‘gate’. Both words allude to the fact that Adam brake his winter fast with persimmons and oysters, thereby opening a gate.

The body of work on display are the second episode of a trilogy started in 2011 in Japan after the tsunami and Fukushima Daiichi nuclear disaster. Two long paintings cover the exhibition walls and one organic sculpture, evolved from a painting, spreads out in the space together with a complex smell. They were made in Japan where the artist applied daily, for two months, layers of oysters, persimmons or indigo on Kozo Washi, a traditional handmade Japanese paper made from the Kozo plant which is generally used in a wide range of products including shoji (lattice screens), fusuma (sliding doors), umbrellas, kites, toys, and lanterns.

The ambient temperature of a mountainous shoe factory freezing at night and other atmospheric qualities interacted with the paper and kept changing the paintings. Site-responsive and transitory for their own nature, these works act as a self portrait of the materials Adam Avikainen used, a collaborative dance of the artist with ‘Kaki’. They are beings, telling us their stories. The stories that the artist translates for us are the following:

-Caloric Restriction-
The volcanic mouth-gates are opened when energy input levels are decreased to 75 percent standard burn rates.
Example: An indigo oyster cloud is placed above one quadrant to block radiation from being absorbed by the ghost planet. Geo/Bio- growth hormone ejected from veins.

-Progression of Bitterness to Sweetness-
Bitter things make the tongues and rivers curl around the poison. A persimmon allowed to dry in the winter mountain snores increases flavor profile to the level of grandmaster. An oyster eaten at the end of the northern starving moon (February) injects life with a pearl eye and eating one during the northern planting moon (March) causes milky cataract blindness.

-Pluripotent Stem Cells-
After 48 hours of fasting, cells capable of forming any bodily component torrentially flow. Same applies to planets, oyster beds, persimmon forests, etcetera. Scale to size of reproductive organs. For example, the Pacific Ocean’s orange-indigo genitalia is about half the size of a human’s...so sew the sea’s mouth-caves shut for about three feedings and you’ll get a brand new body of water straight from the cosmic well...water at the moment the spiritual bonds form.

-Cells on Strike-
After 72 hours of fasting, the digestion system is at rest. The body slows...the mops come out and the hostel is scrubbed of all tourist scratches behind the memories. This is programmed. Cancer cells have evolved too quickly to know how to hibernate or clean out the trust-funded baby’s island’s cave. So they cannibalize, having never known hunger.

-If You Are a Human on the Verge of Growing Pubes, Do This:
Restrict yourself to 1000 calories a day for one trip around the star. This near-starvation diet teaches your morphing body how to more efficiently burn persimmon power bars into jack-off machines. This knowledge is passed through genes to your fiery great-grandchildren bivalves during the last rains.
-
Adam Avikainen (1978, Shakopee, Minnesota) studied film theory and creative writing at the University of Southern California, video art at the University of Minnesota and time & space art at the Kuvataideakatemia in Helsinki. He subsequently attended the Ateliers in 2005-2007. His past solo exhibitions include major institutions such as Haus der Kulturen der Welt, Berlin (2014), ARTSPACE, Auckland (2012) and Center for Contemporary Art, Kitakyushu (2008). His work has been presented at the 10th Shanghai Biennale (2014), Ilmin Museum of Art, Seoul (2013), Taipei Biennial (2012), FormContent, London (2010), Kunsthalle, Bern (2010, 2009), Stedelijk Museum, Amsterdam (2006), among others.
www.gmvz.com