Any Kind of Cruelty 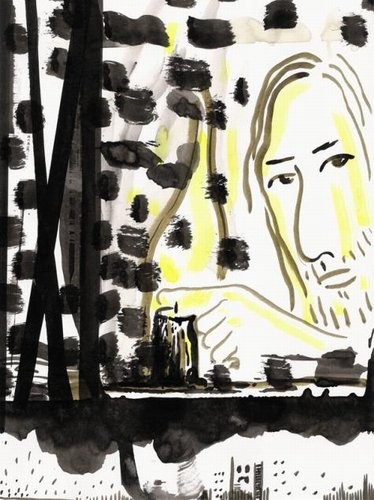 © Cornelius Quabeck
Any Kind of Cruelty, 2009
ink and watercolor on paper
27,8 x 21 cm
ANY KIND OF CRUELTY
All artists of the gallery

Adam Avikainen, Matt Bryans, Matt Calderwood, Stephan Gripp, Assaf Gruber, Martijn Hesseling, Chris Jones, Alexandra Leykauf, Navid Nuur
Wilfredo Prieto, Cornelius Quabeck, Maurice Scheltens, Praneet Soi
Lucy Stein
The exhibition ‘Any Kind Of Cruelty’ borrows its title from an 1919 drawing of Paul Klee. * For its 5th Anniversary, Gallery Martin van Zomeren presents a cross section of its portfolio: The show assembles works made by artists working with the gallery since its inspection in 2004, in addition to recent collaborators. The exhibition reflects on a commercial, personal and political artistic strategies within the ‘Cruelty’ theme and features both new and existing works.
Stephan Gripp’s (1969, Germany) prints and sculptures evoke a mood in which fear and trauma prevail. His preferred materials point towards the kind of interior most commonly associated with discotheques or swinger clubs, places for sexual or cultural privacy.
For the past years, the Indian artist Praneet Soi (1971) was investigating the presentation of the figure in an age that has reduced the individual to a nullity through surveillance, the circumscription of rights, and total war. Soi’s ongoing series ‘Disasters of War’ is as poignant as is it horrifying. Recently, the series takes a cinematic direction while narrating the war through art history and media imagery.
Matt Bryans (1977, UK) presents his own origin myth, an elusive and poetic geography of wrought textures and erased histories; Alexandra Leykauf (1976, Germany) manipulates archive material and rediscovers photos and printed media. Leykauf’s work focuses on the different levels at which an image exists. Her work is often a visual evidence for destruction.
Assaf Gruber’s (1980, Israel) ‘Homealone’ Features a Marakas hung above 20 kilo of rice. The work provide analogies for restrained violence and absurdity of force, while in Wilfredo Prieto’s (1978, Cuba) ‘Footprint’ a satiric nonsensical impulse is being reduced to a minimum. Also Matt Calderwood (1975, Northern Ireland) chose a playful method; The construction of his sculptures is clearly visible and understood; yet it deals with balance, instability, danger and risk in a counterbalanced minimalism.
Adam Avikainen’s (1978, USA) ‘Heuristic Hi-FI/ Misnomer’ is a painting which functions as still image from an imagery storyboard, a frozen moment from a film which will never be made; Maurice Scheltens’ (1972, The Netherlands) work is detailed to the point of absurdity, ranging between the hyper realistic and the fakery.
Chris Jones’ (1975, UK) sculptures are beautiful and disgusting, exquisitely patterned, yet in a sticky, grotesque and semi decayed state. The work resonates strongly with the language of movies and advertisements. The result is an apocalyptic imagery in a none-time point between life and death.
In ‘F. U Starsign’ Cornelius Quabeck (1974, Germany) presents us with the seductions, disjunctions, outrages and delights of the contemporary world via one stare of an Capricorn-ish looking young man. Martijn Hesseling’s (1971, The Netherlands) book is made of what seems like an infinite collection of faces, however non of them can be captured on its own.
Navid Nuur (1976, Teheran) looks at the rules that set the infinitesimal against the grandiose, the infra-thin against the monumental, and pit private enjoyment against the seriousness of the public sphere. He registers minute, ramifying pulsations of thought, blinks in the corner of the eye and multiplying possibilities of action.
A wide-eyed female figure pulling up her dress in Lucy Stein’s (1979, UK) ‘Living in Orange’; Accompany by drawings, an early drawing of the artist comes to mind, in which a black dress hanging against a red background. Below it, written in oblique cursive letters, is the question: ‘What hurts more? Having your body negatively critiqued, or your work?’
www.gmvz.com