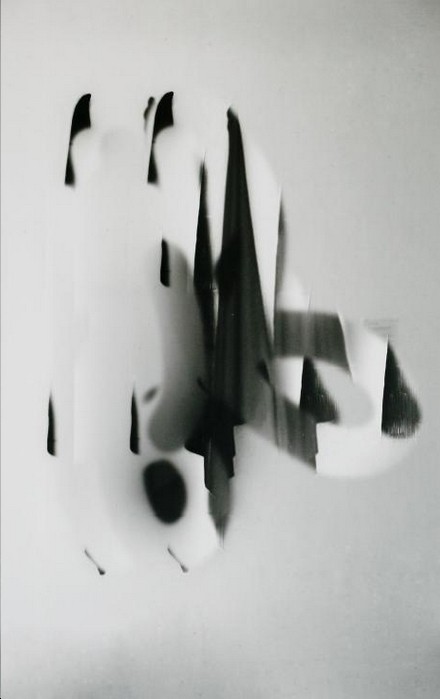 The two works on paper by Martijn Hendriks titled 'Third' and 'Sixth', both made in 2012, are part of a growing body of work that examines the notion of the ‘parallax object’, a term borrowed from philosopher Slavoj Žižek. Relating the notion of the parallax object to the emerging field of Object Oriented Ontology, Martijn Hendriks asks how an object can re-appear in new forms through its translation into text, its proximity to other objects, its documentation and circulation in the world. For 'Third' and 'Sixth', a photograph of a sculptural object has been repeatedly transformed through a number of different media and is presented as a proposition for two new sculptural objects.

Alexandra Leykauf plays with strategies of elusiveness. She often uses found images and decontextualizes them. In this way she opens images up to new possibilities.
Her reliefs are papier-mâché sculptures based on images of architecture. Thus they can be described as a double translation: architecture into photography and photography into sculpture. The perspective of the photo is modified and it is not anymore the result of the observer's point of view: moved to a sculpture, it becomes intrinsic to the three dimensional object.

The 'Blackouts' of Willem Oorebeek are based on images found in the media. He overprints them with black ink and it is possible to see the image only from a particular angle. Thus he creates a tension between the strong visibility of mass media images and the invisibility of the 'Blackouts'. The 'Blackouts' become self-generated afterimages, since the viewer will 'see' the images even though they are not anymore visible.
'Séance BLACKOUT (London couch) III' is based on a magazine page with the well-known image of Freud's couch. The text is completely whitened and the image covered with a layer of black ink.
-
The work of Martijn Hendriks (b. 1973, Eindhoven) encompasses sculptures, texts, prints and videos. His work has been shown at the New Museum, New York (2010), the Massachusetts Museum of Contemporary Art, North Adams (2011), Museum Boijmans van Beuningen, Rotterdam (2012), De Vleeshal, Middelburg (2012), Nest, Den Haag (2013) and W139, Amsterdam (2012) among others. He is currently working on The Parallax Object, an international project that will run through 2014 and which involves a sculpture that changes its form as it travels from one exhibition space to another.