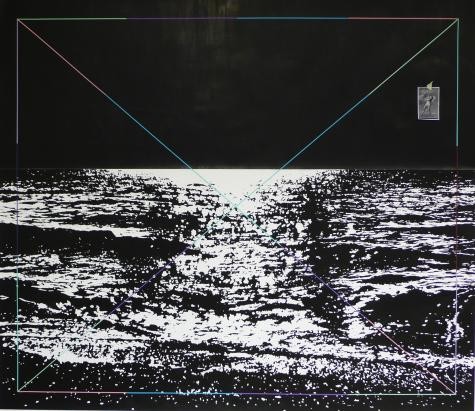 Martin van Zomeren is pleased to present 'Nothing Ever Happened' by the Austrian artist Nick Oberthaler.

From populated scenes to full moons, midnight vultures, seascapes and
geometrical forms, Nick Oberthaler's imagery ranges between romanticism,
folklore and rebellious youth, though not without irony. The motifs used often belong to a vocabulary of cliches, gestures and poses out of a so-called collective memory.
He contrasts the eternal against the ephemeral, the human gathering against the unconscious of the singular.

The framed paintings and sculptures are the graphic forms of a spatial
narrative, the iconographic fragments of an elliptical landscape.
Oberthaler's varied sources stand out less for their consistency than for the void and the fissures revealed by this game of references, a game in which the artist takes no clear position. His work forming a magical realist maelstrom of uncertain outcome, in which icons, slogans, bodies and symbols swirl.