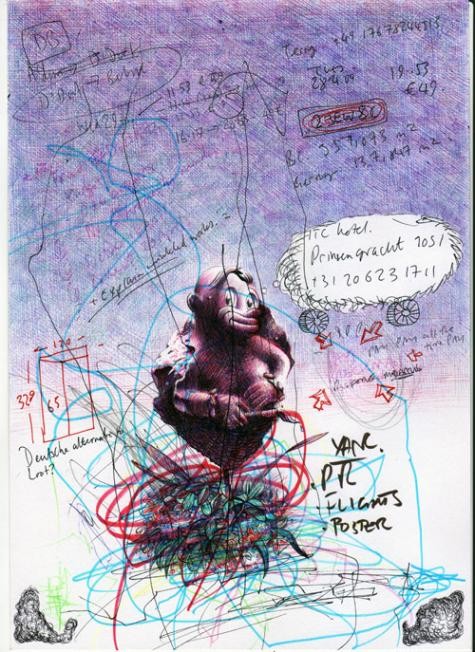 'The sway of alcohol over mankind is unquestionably due to its power to stimulate the mystical faculties of human nature, usually crushed to earth by the cold facts and dry criticisms of the sober hour. Sobriety diminishes,
discriminates, and says no; drunkenness expands, unites, and says yes.'
William James.

Martin van Zomeren is pleased to present 'Ecstatic Visions etc.'
The exhibition brings together two groups of recent works by Berlin based British artist Paul McDevitt. These are concerned with ideas of vision and its distortions, as the picture surfaces themselves are often distorted and
damaged. In one way the work looks at the skewed vision that comes
through inebriation, and in another with the equally intoxicated reveries of artistic vision.

In the 'Still-lifes' (2008-9) the surface of these identically sized canvases has been primed with a grid of blank beer-mats. The gouache paintings echo and imitate Dutch still-life traditions. Once painted, each canvas is placed face down onto a pile of broken beer bottles before being stomped on by the artist. The surfaces become grazed, cut and pierced. Shards of glass remain where they have punctured the picture plane. From a distance the image
remains intact. Up close they are ravaged and scarred.

In the Series 'Notes to Self' (2009) a pad of paper acts as both a mouse mat and a place for jotting down notes at the side of the artistï¿1⁄2s computer.
A clearing at the centre of each sheet of paper indicates the location of the mouse. After each page was busied with notes it was later reanimated and worked over in the studio. The information was personal and for a brief while the notes were relevant. A mundane diary of web addresses, flight details, phone numbers serve as backdrops to fanciful (or informal) and sometimes elaborate studio sketches. Unlike sketches which represents the artistï¿1⁄2s
studio work, the drawings in 'Notes to Self' keep record on his office hours and act as an archive of activity.