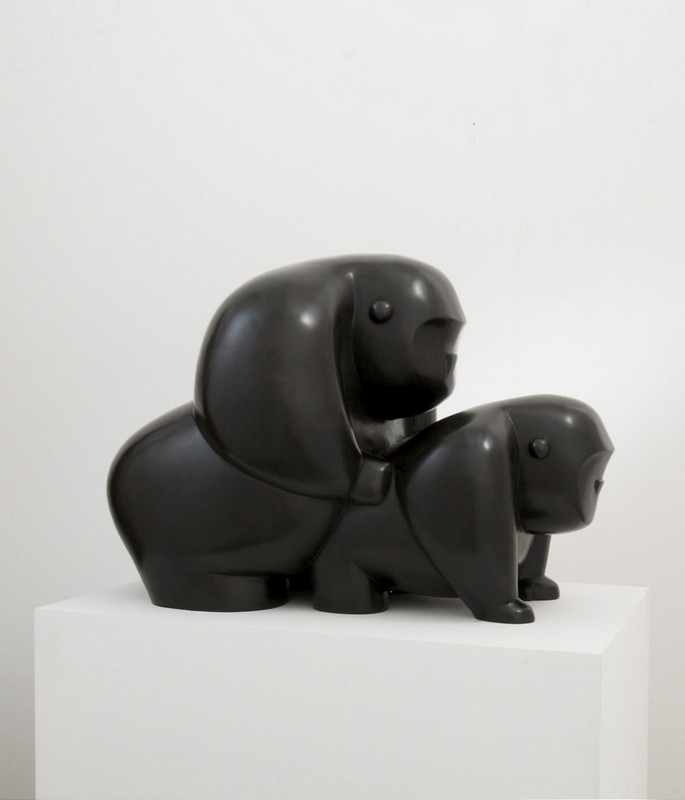 Established Cape Town based artist Brett Murray returns to Goodman Gallery Johannesburg with Hail to the Thief II. This body of satirical work continues his acerbic attacks on abuses of power, corruption and political dumbness seen in his 2010 Cape Town show Hail to the Thief. In this sequel show, Murray’s bronzes, etchings, paintings and silk-screens form part of a vitriolic and succinct censure of bad governance and are his attempts to humorously expose the paucity of morals and greed within the ruling elite.
Brett Murray studied at the University of Cape Town where he was awarded his Master’s of Fine Arts degree in 1989. He has exhibited extensively in South Africa and abroad. From 1991 to 1994 he established the sculpture department at the University of Stellenbosch, where he curated the show Thirty Sculptors from the Western Cape in 1992. In 1995 he curated, with Kevin Brand, Scurvy, at the Castle of Good Hope in Cape Town. That year he co-curated Junge Kunst Aus Zud Afrika for the Hänel Gallery in Frankfurt, Germany.
His solo shows include: White Boy Sings the Blues at the Rembrandt Gallery in Johannesburg in 1996, I love Africa at the Bell-Roberts Gallery in Cape Town in 2000, Us and Them at the Axis Gallery in New York in 2003, Sleep Sleep and Crocodile Tears at the Goodman Galleries in Johannesburg and Cape Town. Murray was included on the Cuban Biennial of 1994, and subsequently his works were exhibited at the Ludwig Museum of Contemporary Art in Germany. He was included on the group show Springtime in Chile at the Museum of Contemporary Art in Santiago, Chile. He was also part of the traveling show Liberated Voices, Contemporary Art From South Africa which opened at the Museum for African Art in New York in 1998. His work formed part of the shows Min(d)fields at the Kunsthaus in Baselland, Switzerland in 2004 and The Geopolitics of Animation at the Centro Andaluz de Arte Contemporaneo in Seville in Spain in 2007.
He won the Cape Town Urban Art competition in 1998 that resulted in the public work Africa, a 3.5 metre bronze sculpture, being erected in Cape Town’s city centre. He won, with Stefaans Samcuia, the commission to produce an 8 × 30 metre wall sculpture for the foyer of the Cape Town International Convention Centre in 2003. He was nominated as the Standard Bank Young Artist in 2002.
Murray’s work is housed in numerous South African and international collections including Iziko, South African National Gallery, Cape Town, Johannesburg Art Gallery; Durban Art Gallery Tatham Art Gallery, University of the Witwatersrand, University of Cape Town, University of South Africa, Sandton Municipality, BHP Billiton Collection, MTN Collection, Sasol Collection, South African Breweries, South African Broadcasting Corporation, The South African Reserve Bank, Vodacom Collection, Collection of Mikki and Stanley Weithorn, USA.
Murray is a full-time artist who works in Cape Town, South Africa, where he lives with his wife Sanell Aggenbach and their daughter Lola and son Kai.
www.goodman-gallery.com