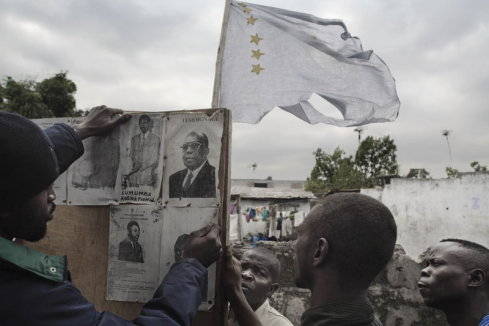 The Goodman Gallery presents a solo exhibition of new work by Guy Tillim opening on Saturday 20th January 2007. This exhibition entitled 'Congo Democratic' presents the body of photographs that Tillim took while he was in the Congo during 2006.
Successive wars in the Congo, one beginning 1996 and the other in 1998 have left the country devastated. After 5 years of combat, and an estimated 3.5 million mainly civilian deaths, an agreement was reached in 2003 that called for general elections and a new constitution by 2005. Some 3400 candidates came forth to contest the 500 seats in the house of assembly, 800 on the ballot in Kinshasa. There were 33 presidential candidates. The ballot was an amazing 6 page poster-size document with pen pictures of all the candidates that were hard to recognise. The campaign sloganeering and banners did not say "Vote Adam Bombole, Health for All", for example, but "Vote Adam Bombole, page 4 No. 352"
Etienne Tshisikedi, a veteran former minister under Mobutu Sese Seko, had called for a boycott of the elections in July. Young men in Kinshasa fought battles with police in his name as they tore down and burned election paraphernalia, directing special hostility at the visage of President Josef Kabila, who was running as an independent, though listed as an "initiator" of the People's Party for Reconstruction and Democracy which chose him as their candidate.
I asked a Congolese friend if he had a theory about the large number of candidates. "Visibility is everything," he told me. "Get yourself on a list, so when the next thing happens, perhaps a peace agreement where power and influences are divided up, you will be on it somewhere." Kabila and his main rival, Jean-Pierre Bemba, who have been at war with each other and control separate armies now barracked in Kinshasa, have unofficially divided up these spoils for years.
Bemba, who is the leader of the Movement for the Liberation of Congo, a rebel group turned political party, took 20% of the 17 million votes to Kabila's 44% in the first round of the election. The Kinshasa Street mirrored the wasteland that has been wrought by war between these two men. The lack of provision of basic services, the populist politicking, the violent rallies; but there is a good chance that 450 million dollars, spent mostly the European Union on the election, will transform this rivalry into a constitutional debate (Guy Tillim).
The social and political upheaval that has characterized the Congo for over a decade is captured in Tillim’s photographs, which depict scenes of mass political rallies, protesting and boycotts of the elections, the process of the elections, and destruction that has been caused by the political upheaval. In these images Tillim treads the fine, and teasing, line between images that at a first glance resemble reportage but on a closer look, ‘reach eternity through the moment’, to use a phrase of Henri Cartier Bresson. The crowd scenes transcend the circumstances; they recall the images of the French Revolution of 1794 and encapsulate the emotions the many other scenes of revolt that accompanied the nationalism and resistance movements since. In contrast, the diptychs, juxtaposing the private lives of the candidates in their homes and the streets outside, allow us to reflect on private spheres of live away from the noisy rhetoric in a society where power is so unstable and contested. This series of photographs of the Congo Democratic are typical of Tillim’s style: portraying harsh realities from a distant, yet empathetic, point of view. Tillim’s work attempts to offer hope and redemption to the brutal realities of Congo life.
In recent months, Tillim’s work has been exhibited at the Sao Paulo Biennale in October 2006 (where this Congo Democratic series was first shown) as well as on the exhibition at the Neue Galerie in Graz, SLUM: Art and life in the here and now of the civil age, curated by Peter Weibel, and in Photography, Video, Mixed Media III at the DaimlerChrysler Gallery in Berlin. His Petros Village series was exhibited concurrently at Michael Stevenson in May 2006 and at the Museo di Roma in Trastevere, Rome, as part of Rome Photo Festival 2006. He has solo shows scheduled for early 2007 with E x t r a s p a z i o in Rome and the Goodman Gallery in Johannesburg. His work is included in the recent Vitamin Ph (Phaidon, 2006).

© Guy Tillim
Lumumbiste party supporters prepare for a meeting, pinning up their picutres of Partice Lumumba and their leader Antoine Gizenga who was a deputy to Lumumba after the first elections in 1962
www.goodman-gallery.com