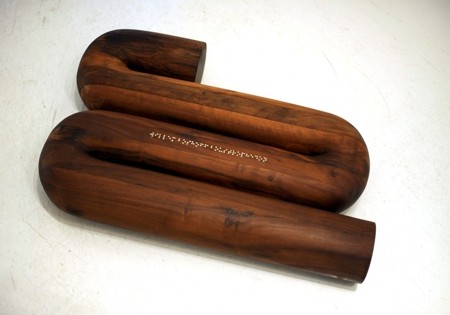 ‘Language’ is the system of communication, in the form of speech and writing, employed by a specific group of people, usually originating from a specific geographical area or region. Human language is inseparable from human thought and distinguishes man from animals.
Different aspects of language had become the source for many conceptual artworks by the time the group Art & Language was founded by Michael Baldwin, David Bainbridge, Terry Atkinson, and Harold Hurrell in 1968. These artists considered language to be a crucial aspect of their practice, in which they critiqued the underlying assumptions of modern painting and sculpture, formalist processes, art practices, production, and criticism. Since the 1970s, language has been seen as a means of moving from form and image-based works to a more theoretical and conceptual artistic discourse. This shift, away from the image and towards text, has led to a new relationship between image and text, in which images are translated to symbols, and symbols to text. It has meant that text – rather than image – becomes a basis for art production, which in turn has meant the appearance of ‘art as idea’.
Questioning the process of art production, American artists like Jenny Holzer have built on the traditions of conceptual and installation art of the late 1960s. Holzer developed a mode of textual art during the 1970s, using electronic signs and various printed media to explore language and text as a form of art. Her ‘Inflammatory Essays’, conceived in the late 1970s, are indicative of the way in which she has created a division between text and image. Prior to this, Joseph Kosuth proposed the use of text in his work as means of replacing painting, exploring the production and role of language and meaning in art. Text in Kosuth’s work of the 1960s facilitates a conceptual mode of production and the dissolution of the art object.
Language continued to be fundamental in the work of many American artists during the 1980s. Lorna Simpson, for example, used language as a device to move away from purely image-based photography. Simpson’s combination of text and photography allowed her to construct readings of the black woman as an erotic curiosity and, at the same time, to change the simple reading of images, and to create layers of signification in her work.
In the contemporary South African context, artists such as Willem Boshoff make works which are informed by language. Boshoff’s sculptures and dictionaries suggest a relationship with language that extends beyond the simple use of text, to a specific interest in language itself and what constitutes language as a form.
Similarly, Frances Goodman has explored the desires, compulsions, insecurities, and obsessions hidden in our use of language, saying that ‘After working with a number of media I eventually found that words and language had the uncanny ability to unnerve and get under people’s skins, in a way that visual images and modes could not ... sometimes [words] are simple and clear, and yet they are often full of innuendoes and subtexts’.
Language also defines power relations, and in the colonial context, the language of the coloniser reinforced power structures and symbolised authority. Artists have often made reference to this in their works, showing the role that language plays in our relation to society and to power. Brett Murray for example, plays with words in order to critique South African politics. Kudzanai Chiurai uses posters, such as the kind used in political campaigns, , to demonstrate state violence, political unrest, and corrupted power.
Kendell Geers uses language to interrogate the art establishment and society in general, questioning our existing moral codes and suggesting new approaches. He has argued that ‘Language is a self-replicating virus that can only be destroyed by a stronger, more resilient virus. Through the mirror of the colloquial, the tongue gets twisted and forgets its place in collecting our thoughts’, and that ‘language is oppressive for it only acknowledges that which can be named. It is not the result of any particular individual’s design as much as the external manifestation of culture’.
Works by these artists and the others on this show have been chosen for their engagement with language and discourse. Sometimes this engagement is enacted on the level of form – so that words and characters become images – and at other times the engagement is an interrogation, through text, of what constitutes the image.
www.goodman-gallery.com