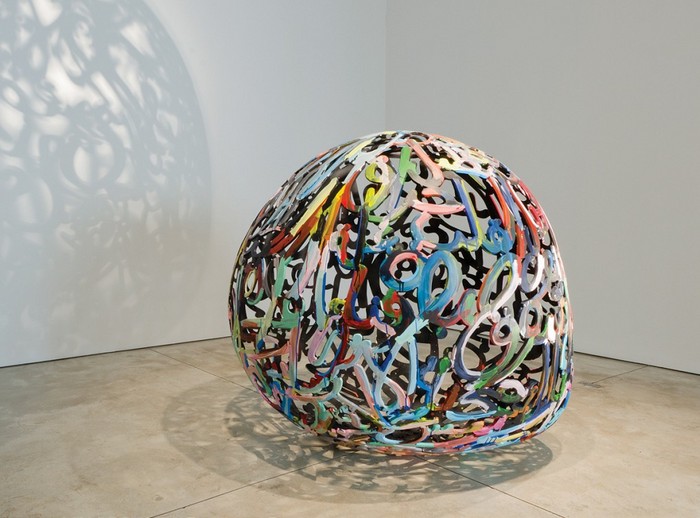 Goodman Gallery Johannesburg is pleased to present No Romance, a three person-exhibition featuring individual works by Ghada Amer, Reza Farkhondeh and collaborative work by the two artists.
Ghada Amer and Reza Farkhondeh met in art school in Nice in 1988. They both moved to New York in 1996 where they established studios in Harlem. The collaborative works between Amer and Farkhondeh started by accident in the early 2000s. “I began to paint on canvasses that Ghada was preparing for her work,” explained Farkhondeh in an interview with Martine Antle in the catalogue for The Gardens Next Door at Galeria Filomena Soares in Lisbon, 2010. “I would apply acrylic paint using masking tape. That was the beginning of new experimentation and of new discoveries... A little later I began to [make] watercolours and this time Ghada intervened on them... And gradually we created together a body of works on paper... One of the secrets is coming to appreciate sharing territory without destroying harmony and not thinking of establishing one’s ego as the sole winner in the collaborative work.” Their collaborative process involves passing the drawings back and forth until each artist is creatively satisfied. The show at Goodman Gallery presents a sampling of several series that the two artists have developed since 2005, including three large new works on paper. Women and nature are the themes of their collaborations.
Amer was born in Cairo, Egypt. She graduated from Villa Arson in Nice, France with an MFA in painting in 1989. For over 20 years Amer has been producing works that are profoundly linked to an aesthetic language specific to women. She chooses needle and thread as her medium to question the classifications of sexuality, beauty, gender and domesticity. “What interests me,” explained Amer in the exhibition catalogue for her show in Brétigny-sur-Orge in 1994, “is the idea of a ‘model to be followed’, and in life we are confronted with these everywhere; from birth one is shown how one must live; one is educated this way, one grows up and follows the model imposed on us. All my work revolves around the idea of ‘a model’.” Amer’s individual contribution to No Romance is a new series of embroidered paintings and a sculpture: 100 words of love – an amorphous, spherical and hollow work, displaying carved out synonyms for the word ”love” in Arabic.
Farkhondeh was born in Iran and graduated with an MFA in video/short film from Villa Arson in 1991. For 20 years Farkhondeh has been developing videos, short films and paintings that deal with lyrical expression within the context of ever-changing cultural differences between Western and Middle Eastern civilisations. From 1991 to 1998, Farkhondeh focused on a series of paintings he calls “99 cents” objects. “The dollar store is so cheap, so real and so present that I could not resist the temptation to paint the objects within it, the discounted objects of our contemporary life,” commented Farkhondeh in the catalogue for his 2004 exhibition at La Chapelle Sainte Elizabeth. In 2001, Farkhondeh started to paint and draw landscapes experimenting with a vast range of techniques and often layering them with stripes of masking tape. These paintings, he explains, evoke “separation, uprooting, wandering, the idea of a landscape that has been cut up and then reassembled through different layers..." Farkhondeh’s individual contribution to No Romance is a new series of paintings under the title of “Broken Landscapes”. These paintings, while they examine nature as the main subject, offer a journey over poetic, social and political landscapes of our time.
www.goodman-gallery.com