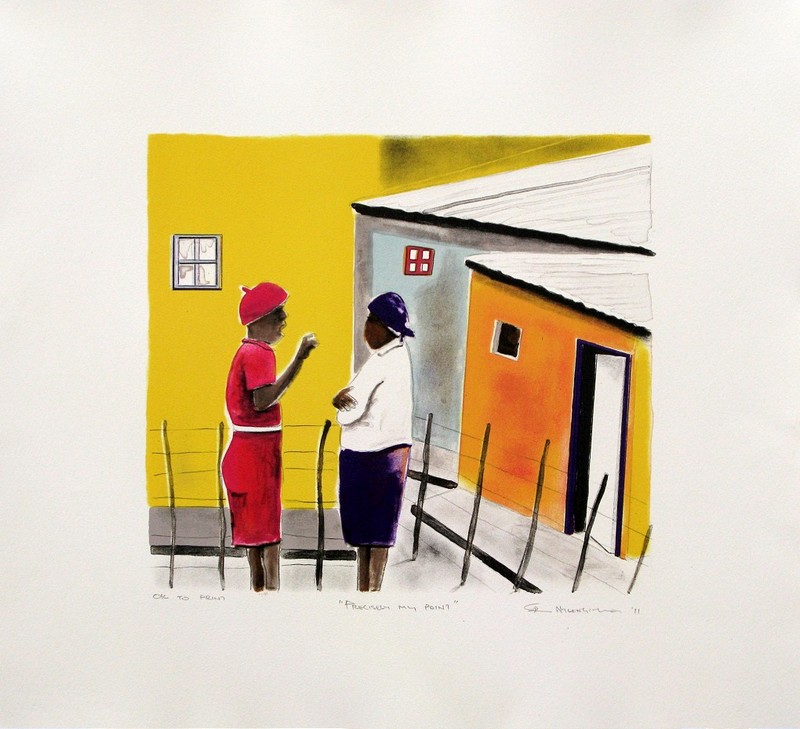 Conversations is an exhibition of new work by Sam Nhlengethwa that portrays the exuberance of the city of Johannesburg and its people.
To Nhlengethwa, this show is an instinctive thematic progression from his earlier work and he describes it as a review of his previous subjects in the context of conversation. Nhlengethwa uses the large-scale cityscape, Cyclists Mural, as the core vision for the show. It was the first piece in the series that he worked on and it took him more than three months to complete. The elevated view eastwards of the city, from his apartment in Newtown, inspired the piece. First, he began mapping out the architecture of the city and then, as he peopled the scene, the theme for Conversations, he says, “began to flow”.
This, as well as a range of new work, focuses on conversation as a basic human interaction in a selection of social contexts: ebullient schoolgirls on a bustling city street, a couple intimately sharing an umbrella, a group of men smoking together after dark. Several of the pieces depict conversations between young men, some located at an initiation school, wrapped in their characteristic grey blankets. These are images of ritualistic communion, charged with anxious anticipation. In the context of conversation, the ceremonial and the everyday comfortably hang alongside each other.
In Nhlengethwa’s last solo show at Goodman Gallery Johannesburg, Kind of Blue (2010), he paid exclusive homage to the landmark Miles Davis album of the same title. Consequently, his work was constrained in terms of subject matter, location and the use of a subdued colour palette. In contrast, Conversations has allowed him complete chromatic freedom. The boisterous use of colour animates the works and lends a levity to the exchanges that they depict.
There is a continued focus on interiors in this show, with the distinction that the stark emptiness of his former interiors has now been populated. Whereas, in the past, Nhlengethwa did not want to “disturb the quietness of the interiors”, he has ushered people into these rooms and allowed their voices to fill the space. As part of his representation of these communal spaces, Nhlengethwa has also included several pieces inspired by a meal shared at his parents’ home, during which he noticed the shadows of his family talking, reflected on the wall.
The titles of the works came to Nhlengethwa as snippets of overheard conversations; some topical, some trivial. He has “always been inspired by people and their surroundings” and these images represent the vitality and humour of the people of Johannesburg. According to Nhlengethwa, to read the titles is to hear the conversations and to think, “This is us”.
The show is comprised of a works in a variety of media including etchings, lithographs, lino prints, tapestries and Nhlengethwa’s hallmark collage, oil and acrylic works.
Nhlengethwa was born in the mining community of Payneville Springs in 1955 and grew up in Ratanda location in Heidelberg, east of Johannesburg. He completed a two-year Fine Art Diploma at the Rorkes Drift Art Centre in the late 1970s. While he exhibited extensively both locally and abroad during the 1980s and ’90s, Nhlengethwa’s travelling solo show South Africa, Yesterday, Today and Tomorrow in 1993 established him at the vanguard of critical consciousness in South Africa and he went on to win the Standard Bank Young Artist Award in 1994. His work has been included in key exhibitions such as Seven Stories About Modern Art in Africa at the Whitechapel Gallery in London and major publications such as Phaidon’s The 20th Century Art Book. He has had several solo shows in South Africa and abroad and has recently exhibited in the 12th International Cairo Biennale (2010) and in (Re)constructions: Contemporary Art from South Africa at Museu de Arte Contemporanea de Niteroi (2011) in Brazil. He has been a resident of the Bag Factory Artists’ Studios in Newtown, Johannesburg since the 1990s.
www.goodman-gallery.com