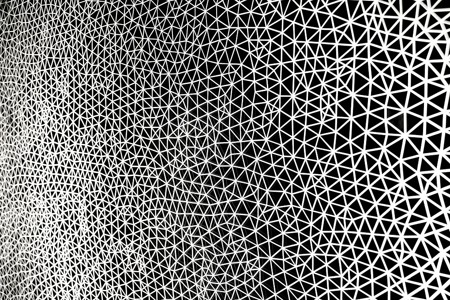 In his first solo exhibition at Goodman Gallery Johannesburg – titled Resonant Structures – Stefanus Rademeyer expands on his interdisciplinary approach to art-making; intersecting the seemingly unlikely fields of art and mathematics. In works that use algorithms for natural structures as a starting point, Rademeyer alters and grows these structures through digital processes. The result is a series of objects and digital drawings that are boundlessly engaging and eloquently beautiful.
In an ongoing explorative pursuit to find a visual equivalent for language, Rademeyer is known for considering fields such as science, literature, philosophy and music within the artworks he creates. In a previous solo show titled Ideograph (2006), Rademeyer visually translated texts by philosophers such as Gilles Deleuze and musical compositions by artists such as John Cage into visual structures, realised in the form of prints and animations.
In Resonant Structures, Rademeyer considers the language of mathematics, which, he explains “is also a symbolic system, so you can call it a language. Mathematical language is a much more logical and coherent system. It’s incredibly specific and is always used from an analytical perspective to solve rational problems or propose logical theorems. So, I thought, what if I turn it on itself?” The mathematical formulas that Rademeyer has been working with over the past three years fall into the category of “generative algorithms”, which incorporate fluctuating values that result in a certain degree of indetermanism. The word “generative” implies the notion of growth and mutation and within the exhibition, the artist explains, the viewer is offered visual clues that allude to an array of natural forms and systems within atomic structures, geology, crystallography, biology, botany, and even zoology.
“In nature you have a code,” Rademeyer says. “Richard Dawkins explains this, saying that essentially genes are like instructions.” Another of Dawkins’ theories to influence Rademeyer is that it is possible to simulate evolution in a basic symbolic system using computational mathematics. The generative algorithms that Rademeyer has created were developed over an extensive period of time, and altered or mutated by him to get specific visual results. He has not only tried to imitate nature, but also attempted to create novel, complex and bizarre structures that are still the result of a logical system. The title of the exhibition suggests that these structures are not representations or abstractions, neither mimicking nor simplifying natural forms, but rather paralleling them.
In order to create a series of algorithmic drawings produced as digital prints, Rademeyer uses the process of scripting within existing computer programmes. “Some of the structures that I draw consist of twenty million different shapes that come together in one structure, so it is physically impossible to do it manually,” he explains. “They are static images, because I’ve stopped the innovative process at some point. Its like a river flowing and you take a snapshot of it. They’re residual of a process.” The resulting structures, the artist continues “almost have personalities, because they’re so complex you imbue them with certain qualities.”
A central component of Resonant Structures is a series of large-scale light boxes that display details of particular algorithms. These light boxes – flawlessly crafted out of mirror, fluorescent lighting, mahogany and Perspex – form an installation that reveals Rademeyer’s interest in the experiential element of visual art. He invites the viewer to look at the exhibition as an ecosystem and, using light as a medium, these objects are designed to absorb the viewer into a new environment. The experience is envisioned be immersive, with a sense of boundaries beginning to blend.
While not everyone who views the show will be conversant enough in mathematical language to completely comprehend the formulas behind the algorithms, Rademeyer’s work maintains appeal on many levels. Not only are the objects and drawings he creates often mesmerisingly arresting, their visual complexity draws you in, compelling you to look deeper, to know and understand more.
Stefanus Rademeyer (b. 1976) holds a Masters Degree with distinction in Fine Arts and Art Theory from the University of Witwatersrand, and has been a full-time practising artist for over ten years. His sculptures and prints can be found in the major corporate and private collections in South Africa and his work is also held in private collections in the United States, the United Kingdom and Europe. In 2001 he was awarded first prize in the Absa L’Atelier competition, and took up residence at the Cité Internationale des Arts in Paris. In 2003 he was awarded the Ampersand Foundation residency in New York. His work has featured at major international events such as Art Basel 2010 and he has held numerous solo exhibitions in South Africa.
www.goodman-gallery.com