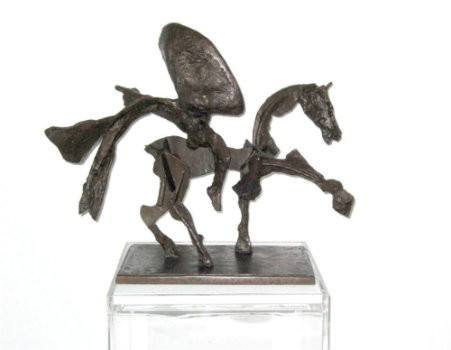 An exhibition of recent work by William Kentridge opens on November 10th 2007, at the Goodman Gallery. This exhibition, entitled What Will Cometakes its title from the Ghanaian proverb "What will come has already come".
Kentridge is renowned for his animated films, drawn and animated using trademark multiple erasure technique, in which he explores the nature of human emotion and memories, and deals with the quest for cultural identity, ingrained history and politics of South Africa, intensely dedicating himself to issues of sight in his work*. Through a series of new drawings, prints, and stereoscopic images that form the basis of What Will Come, Kentridge continues to explore the medium of sight, reflecting his continued concern with optics and the construction of seeing. The exhibition is centered around an eight minute anamorphic film, entitled 'What will come'.
This filmic anamorphosis in which images, drawn and animated by Kentridge, assume their proper form only when reflected in a mirrored cylinder positioned at the projection’s centre. This film draws on the idea of the picture puzzle that originated in the sixteenth century. Kentridge translates this play with perception that operates distorted images that can only be deciphered from a certain angle in his film. The technique of cylindrical mirror anamorphosis Kentridge employs is based on a further level of perception. It is not enough to change one’s point of view but a cylindrical mirror is essential to decode the picture, with a certain radius that reflects the distorted image, causing it to 'straighten' optically. The production of these images relies on Kentridge’s profound knowledge of mathematical rules and optical foundations.
A number of anamorphic drawings from the film will also be shown, mirrored in cylinders. Other work concerned with optics and the construction of seeing, includes series of stereoscopic photogravures that take on three dimensions as one looks through large stereoscopic viewers. Outsized stereoscopic drawings likewise gain unexpected depth when viewed stereoscopically. In addition to this work which deconstructs the mechanics of seeing, 40 to 50 graphics from the past year will be shown. These relate to the opera The Magic Flute, the mini-theatre installation Black Box, the film 'What Will Come', and to Shostakovich’s opera The Nose. Finally, a series of table-top equestrian sculptures muse on 'the Nose on horseback', as Kentridge begins work towards a production of Shostakovich’s opera The Nose, to open in New York in 2010.
This exhibition will open on Saturday 10th November at noon, and closes on the 14th December 2007.
www.goodman-gallery.com