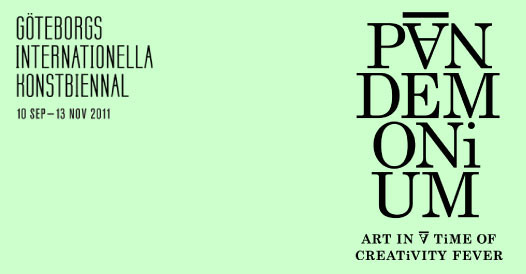 Göteborg International Biennial for Contemporary Art 2011 will be an occasion for artists, thinkers and writers to mull over the turbulence and turmoil that is today’s world. Is it only about a sense of hurly-burly, disorder and dismal confusion — of ‘sheer pandemonium’? Or is it also about transformation and creative emergence — the making of new worlds, possibilities and paradigms? What shape of Europe wells up from economic crash and nosedive — Iceland, Ireland and Greece to name some of the stark cases? How is the project of ‘modernity and Enlightenment’ forged in earlier episodes of chaos and tumult shaping up today?
We have risk, uncertainty and disequilibrium at one end at odds with upturn at the other end, with the ascendancy of Asia, the global South, ‘non-Western modernities’. But if we see turbulence narrowly in terms of ‘financial bubble’, of ‘boom and bust’ — painful and devastating as its concrete consequences are for individuals, actual people and institutions— we overlook the fact that out of the maelstrom other modes and forms of order and designs for living are also brewing up.
We need to grasp turbulence less as a point of utter termination and more as a phase of a dynamic system in which negative and positive pass over into each other — where order emanates out of apparent chaos — a creative, self-organizing system, self-raising, self erasing.

Why Pandemonium?
In John Milton’s epic Paradise Lost (1671), Pandemonium is the castle built by Lucifer and his band after they had been booted out of heaven. It is the base camp from which they plot against the ‘old order’. But it is also a platform from which they seek to launch the project of another creation, a new kind of world albeit a ‘devilish’ one. Through ‘Pandemonium’, Milton reflects on the turbulence and topsy-turvy of civil war England. Was this only chaos and hurly burly? Or was it also the birth of the modern world, of modern values and experience? It ushered in Atlantic and European modernity and Enlightenment— and the promise of a variety of paradises and utopias to come.
The term, therefore, has both positive and negative connotations. From William Blake to Derek Jarman, from punk to pop bands and everyday ‘hubbub’ of street sound and speech, it has been used to explore chaos and disorder that is at the same time about the emergence of new worlds, alternative global modernities, other possibilities.
For the Göteborg International Biennial for Contemporary Art, Pandemonium is a Lab, an experiment zone, bubbling with ideas. Wary of ‘paradises lost’, of utopias that have turned sour or gone of the rails, it sounds today’s turbulent world for new possibilities and perspectives, alternative forms of life and living that are brewing up.

Sarat Maharaj, Professor of Visual Arts and Knowledge Systems at the Malmö Art Academy, Lund University.
Dorothee Albrecht, artist and worked as assistant curator for the 29th São Paulo Biennial. .
Stina Edblom, co-curator and producer for the Biennial. Curator at Göteborgs Konsthall. She has worked as assistant curator of the 29th São Paulo Biennial
Gertrud Sandqvist, Professor of Art Theory and History of Ideas at the Malmö Art Academy
www.konsthallen.goteborg.se