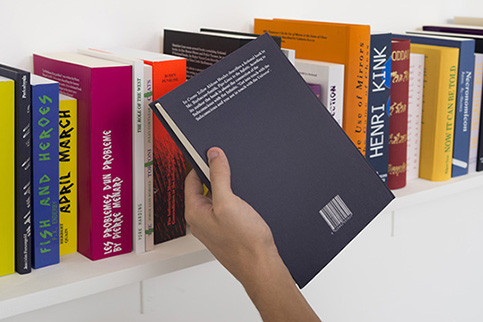 For the first time, The Members Library brings together works from several artists. Partially commissioned, partially existing, the works share an interest in distribution by trading upon what is considered to be “fiction.”

In ‘Avenida Libertador’, Alexander Apóstol’s (b. 1969, Venezuela) gritty black and white video, transsexuals flirt and introduce themselves to the camera as well-known  Venezuelan artists (‘I am Jesus Soto’, ‘I am Cruz Diez’, ‘I am Gego’) while standing in the Liberator Avenue, Caracas. Built during the 1950s, the mega-avenue was an emblem of the dream of progress that swept the nation. Now in an increasingly ideologically polarized country, the Avenida Libertador is the frontier that not only divides the East and West of the city, but also separates two politically opposed municipalities. As a way to mark their territory each municipality has appropriated opposite walls of the avenue and decorated them with murals representing two divergent artistic traditions: The landscape tradition of the turn of 1900s and the constructivist movement (which came to its height during the 1970s). In the video, the transsexuals that inhabit the avenue take over the roles of the official visual artists of each faction, parodying the use of art by the Estate as political propaganda.

Heman Chong
‘Monument to the people we’ve conveniently forgotten (I hate you)’, 2008

This sculptural installation by Heman Chong (b. 1977, Malaysia) centers on a single common object – a business card – multiplied one millionfold. Sized 9 x 5.5 cm, and consisting of a double-sided, solid black offset print on 260 gsm paper, the business cards swarm and cover a given gallery floor as an understated, underfoot monument. In this installation, blackness is barely recognized as a color; rather, it is black as defined by a million separate objects. Spread over the ground in layered piles to form an unbearable tactility and slippery instability, the business cards bring to mind notions of failed promises and the fruitless intimacy of personal relations.

With subtle, sometimes hidden, interventions in our reality Jasper Coppes (b. 1983, Netherlands) explores the way we relate to objects and spaces. In doing so he simulates cultural heritage or lets architectural constructions merge into chosen environments. Coppes works with the assumption that when our usual forms of knowledge decline, it becomes possible to restore a movement towards the uncertainty of the present. Because thanks to our ability to forget the commonplace we have the opportunity to experience the presence of that which is not, is no longer, or is not yet.

For the Grazer Kunstverein, Coppes ‘weaved’ a story into three publications (Peter Handke’s ‘Die Wiederholung’, Oscar Wilde’s ‘The Importance of Being Earnest’, and Alberto Manguel/Gianni Guadalupi’s ‘The Dictionary of Imaginary Places’) that were proposed by the members for the Members Library. Coppes therefore creates a sudden break into a narrative, bringing the reader into a confused state of being.

‘The Phantom Library’ (since 2011) is an ongoing project which consists of the production of a library of fictional books mentioned within other existing books by authors such as Philip K. Dick, Stanislaw Lem, Jorge Luis Borges, Vladimir Nabokov, Roberto Bolano, among others. Kurant acquires ISBN numbers and barcodes to give these fictional books actual economic identities, and then produces a physical copy of each book. Printing processes that normally manufacture thousands of copies produce just one copy of each book, creating a series of ‘unique multiples.’ ‘The Phantom Library’ anticipates the future hybrid modes of production hovering between mass production and individuality, with industrially produced unique objects, each one the result of a negotiation between nano agents, or altered by an algorithm. The back cover of each book includes a plot summary and/or all of the information about the fictional book that was provided by the original author describing it. In collaboration with designer and artist Kasia Korczak the typography has been designed for an unknown content: the three typefaces on the cover have been altered and distorted by different computer algorithms to produce an endless quantity of new typefaces ranging from pure abstractions to readable ones. Several books in ‘The Phantom Library’ were subsequently commissioned. When these books are written and published by the invited writers they will gradually replace the blank pages of the books in the Library. ‘Phantom Library’ refers to the purely imaginary fabrication of value in financial capitalism (‘phantom capital’) and to speculation becoming a mode of production in both art and finance.

*The Members Library is constructed and designed by the artist Céline Condorelli (b. 1974, France) in collaboration with Harry Thaler as a permanent work entitled ‘Things That Go Without Saying’. The structure built for The Members Library is part of a series entitled ‘Additionals’. These different prop-like objects and quasi-functional structures operate at a scale between furniture and architecture.