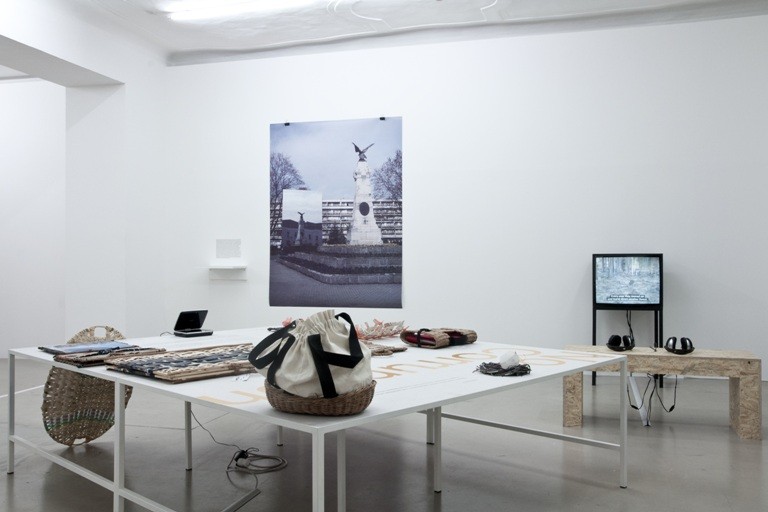 "Cultural heritage is not the same thing as national identity." (Anthony C. Grayling)

We face a constantly increasing tendency to national self-construction in culture and politics in almost every country in Europe for several years. In conjunction with these events, the project queries the function of folklorism within the formation of political belief- and valuesystems.

The point of departure for the project is that current manifestations of folklorism are not only to be understood as an instrument of nationalist politics, but also as their actual production as well. For nationalist politics results, where it is successful, in folklorizing the public sphere... a staged and artificially produced homogeneous reality.

Artistic productions in Public Folklore will critically explore current phenomena of folklorization in politics, media, tourism, popular culture and commercialism. What does the exercise of folkorism mean for people’s world of life? What are its effects on everyday culture? And which intentions are behind it? Some analyze the political contexts and social impacts, whereas others produce counter-reality with concrete actions or in project work, for example by liberating a folkloristically adapted tradition from its stylization.

The exhibition is based on the observation (and current academic research findings) that folklore and folklorist signs are consciously (re-) employed and instrumentalized (not only) in Europe to create possibilities for nationalist identification and to thus produce communities and majorities (as well as minorities and marginalization on the other end).

The connection between folklorism and nationalism has already existed since the beginning.
Johann Gottfried von Herder (born 1744), one of the first to promote collecting and preserving “folklore” in the German-speaking region, wanted to document the so-called “Volksgeist”, i.e. the soul or spirit of the people, the tradition and the identity of a “folk” or people.
Herder also already established a physiognomy between landscape and people. He presumed that the folk has a soul that forms its basic character (“Volksseele”).

The (nation-state) transformations in Europe of the 19th century resulted in an increased interest in the narratives of common folk culture on which identity was founded.
Many of these kinds of narratives or their adapted copies are regaining more and more popularity today.
They are needed to legitimize current politics. Among other things, territorial claims are derived from them, the exclusion of different ethnicities and languages legitimized, or dominant culture erected.

Following from this, the project considers folklorism as a double construction:
The Munich folklorist Hans Moser earlier sought to have folklorism understood as “conveying and continuing second-hand folk culture”.
He pointed out that, especially after World War Two, folklorism has been characterized by its commercial use, for example in advertising and tourism.

In addition, from the beginning the discovery of folklore has been based on a bourgeois romanticization of landscape and its inhabitants that began at the turn from the 18th to the 19th century.
So it was less of a discovery than a construction that was to be equated with a glorification of reality.
Nationalist politics purposely make use of the folklorist thesis that every people has a soul that forms the character of that people, and that this conditions the unity of a people and defines its place. In nationalist use, folklore is given the role of depicting the “soul” of a people.
The project title Public Folklore designates the phenomenon or the attempt by current politics in Europe to stage this purported depiction of a folk character.

Processes of folklorizing can be found in all European countries.
At the same time, there are partially different causes and historical contexts for their appearance.
And folklorism (as described above) is not at all a new phenomenon.
However: in its concrete political usage and variations, current folkorism has undergone a strong renaissance.

Socio-Cultural Contexts/Backgrounds:
The historical circumstances for this can be represented in a simplified way with three contexts: first through the disappearance of Real Socialist political systems and Soviet dominance in Eastern Europe, secondly with the increasing worldwide systemic processes of networking economic and political processes summarized under the key word globalization, and thirdly with the ongoing European process and its goal of an increasing centralization. The disappearance of really existing Socialism and Communism and the break-up of the Soviet Union resulted in the necessity for a whole series of Eastern European countries to establish new political narratives, and through globalization and Europe on the other hand, a feeling has spread in many spheres of the population of a loss of their own significance and identity. In many cases there is a narrative of national identity – the good old fairy-tale of the “soul of the people” – that claims to be able to offer a better future by recalling a (purportedly) shared genuine cultural identity.
www.grazerkunstverein.org